More residential plots to be released in Mullikulum

By Sarah Hannan in Mullikulum 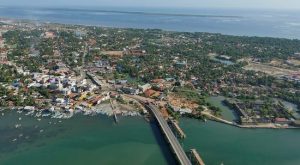 With most of the internally displaced people (IDP) now being given government-allocated land to resettle, there are still some who are voluntarily displaced, requesting their sovereign land back.

In July 2018, media reports emerged of about 80 families that moved into makeshift huts that were set around the land of Church of Our Lady of Assumption in Mullikulum.

The protestors gave up their sit-in protest after experiencing torrential rains.

During a recent visit to the area, The Sunday Morning observed that the church and the Mullikulum Roman Catholic Tamil Mixed School were now, in fact, situated in the middle of the North-Western Naval Command Headquarters which was declared open in 2013.

With the incumbent Government promising to release the lands in the vicinity of the church and the school in December 2017, the Mullikulum IDP families now hope that the Navy occupying the area too will be moved.

However, more construction sites seem to have popped up with several facilities added with each passing year.

So far, the foundations for three houses were laid out on the released land, with the Government promising 12 more plots to be released in 2019.

September 20, 2020 bythemorningeditor1 liberty No Comments
Two health sector associations, namely the Association of Medical Specialists (AMS) and the Government Medical Officers’ Association (GMOA), are at loggerheads over what has been termed the “current c

June 9, 2019 bythemorninglk No Comments
The Criminal Investigations Department (CID) has taken over the investigations into a racket involving a Chinese national which was busted last week.