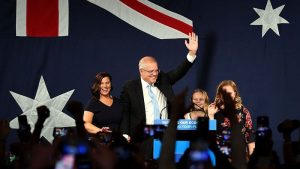 Australian Prime Minister Scott Morrison has thanked voters for re-electing his conservative coalition in a shock result at the federal polls.

He told supporters he had “always believed in miracles” as partial results showed the Liberal-National Coalition close to a majority.

Exit polls had suggested a narrow Labor win for the first time in six years.

The final result of the election may not be known for some hours, but with more than 70% of votes counted the Coalition has won, or is ahead in, 74 seats in its quest for a 76-seat majority, with Labor on just 66 seats.

Australia has mandatory voting and a record 16.4 million voters enrolled for the election, which returns a new House of Representatives and just over half of the seats in the Senate. (BBC)

Why India’s second wave threatens to be worse than first

April 6, 2021 byNews Admin No Comments
A familiar scene is taking place across India. In large cities, hospital beds are filling up with Covid-19 patients. Warehouses, unused trains, and large public spaces are being converted into makeshi