August 28, 2020 by themorningeditor1 liberty No Comments 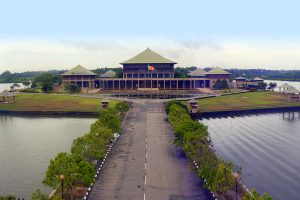 The meals served to parliamentarians in the House became a hot topic last Wednesday (26) following a speech delivered by a parliamentary official on the final day of the two-day orientation workshop organised by Parliament for first-time legislators.

The Financial Director of Parliament, during his speech on the financial benefits enjoyed by the members of Parliament, has said that a meal served to a parliamentarian is valued at Rs. 3,000, while it is served to the MP at a subsidised rate of Rs. 200.

However, following the objections raised by several governing party MPs, the Deputy Secretary General of Parliament has said that the audit unit of the House has clarified that a fish meal served to an MP is valued at Rs. 951 while a vegetarian meal is valued at Rs. 629.

Below are excerpts of the dialogue that had taken place between the MPs and parliament officials over the controversial statement on the value of a meal served to legislators in the House.

“Is this meal valued at Rs. 3,000? We had this meal during these two days,” State Minister Dr. Seetha Arambepola has said, being the first to raise objections.

Other MPs have also joined in, saying it was embarrassing for MPs to consume a meal valued at Rs. 3,000 at Rs. 200.

“We don’t see that this meal is worth Rs. 3,000. We can bring our meals from home and consume; we don’t need food from Parliament if this is the case,” Attorney-at-Law MP Premnath Dolawatte has said.

The Deputy Secretary General responded to these objections, saying: “Let’s decide (this) in the future. I just received a message from the audit unit that a fish meal served to an MP is valued at Rs. 951 while a vegetarian meal is valued at Rs. 629.”

Date for Prez Polls not fixed

June 2, 2019 bythemorninglk No Comments
While President Maithripala Sirisena announced last week that the presidential elections would most likely take place on 7 December, the Elections Commission said no date had been fixed.

State revenue: What happened to the tax amnesty?