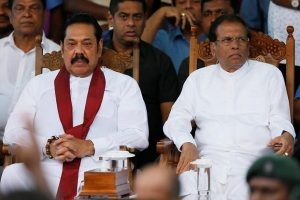 Opposition Leader Mahinda Rajapaksa vehemently denied the Rs 2 Bn lotus tower scam allegation levelled by President Maithripala Sirisena.
President Maithripala Sirisena speaking at the opening ceremony of the Lotus tower on Monday(16) said in 2012 a Chinese company; Aerospace Long-March International Trade (ALIT) had been paid a sum of Rs. 2 bn by the Rajapakse Government as part of the deal for the lotus tower project. Sirisena alledged  once he became President there was no sign of ALIT nor the Rs. 2 Bn.
Rajapaksa in a press statement released today said the sum of Rs. 2 Bn was paid as an upfront fee to the main contractor China National Electronics Corporation and not ALIT. He highlighted that both companies were nominated by the Chinese Government.

“In 2012, the total cost of the Lotus Tower project was estimated at 104.3 million US Dollars. The Exim Bank of China agreed to provide a loan facility of 88.6 million USD or up to  85% of the total project cost. The remaining 15% of the cost had to be borne by the TRC. The contractors for projects financed by the Exim Bank of China are nominated by the Chinese government. Accordingly, the China National Electronics Corporation and ALIT were nominated by the Chinese government.” Rajapaksa said.

He said relevant documentation would show that from day one all payments had been made to the account of China National Electronics Corporation.

He claimed that delayes by the yahapalana government and the main contractor, delayed the completion of the project.

Rajapaksa said the two contractors recommended for the Lotus Tower projects were 100% Chinese government owned conglomerates and that the active party engaged in the contract was always the China National Electronics Corporation and not ALIT.

“To say that a major Chinese government owned conglomerate had disappeared with Rs. two billion belonging to the Sri Lankan government, is a horrendous insult to China. This insulting statement was moreover made in the presence of the Chinese Ambassador.to publicly insult a major world power that has always been friendly and helpful to Sri Lanka, is unconscionable.”

He said the unfounded allegation of a Rs. two billion fraud in the construction of the Lotus Tower was made at its opening ceremony in order to prevent the credit going to the SLPP and the Joint Opposition.

“In April 2019, the Auditor General published a 670 page special report on the Lotus Tower project, but it makes no mention at all of a Chinese contractor who disappeared with Rs. two billion.”

‘If this statement was made due to wrong information being conveyed, I expect the relevant individuals to move quickly to issue a correction. Since all documents pertaining to the Lotus Tower project are available with the TRC and the Auditor General, ascertaining the truth with regard to this matter is not a difficult task at all.”Rajapaksa  stressed.

September 10, 2020 bythemorningeditor1 liberty No Comments
The Government is hoping to streamline the freight cargo export process to minimise time spent on the ground.

Intimate partner violence in Sri Lanka: ‘How much did they hit you?’

November 27, 2021 byNews Admin No Comments
Sri Lanka’s first national survey on women and girls, conducted across the island in 2019, revealed that one in five women (20.4%) in the country experienced physical and/or sexual violence by an inti