October 14, 2018 by themorninglk No Comments 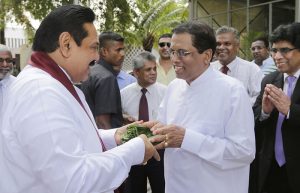 The Sunday Morning reliably learnt that the recent discussion on former President MP Mahinda Rajapaksa and President Maithripala Sirisena reaching a consensus on taking over power, to address the issues faced by the country, is now completely off the table.

Party leaders representing the Joint Opposition in Parliament last week proposed to Rajapaksa to hold an official discussion with Sirisena on how to address the issues faced by the country, especially on the economic front.

However, at the time of going to print, following many inquiries The Sunday Morning reliably learnt that there would not be any form of consensus reached between Rajapaksa and Sirisena on an official or private capacity.

A senior government minister closely associated with the President told The Sunday Morning that there will not be a caretaker government or any other form of alliances formed between the Coalition Government members and members of the Joint Opposition.

Soon after hearing about the discussion between Sirisena and Rajapaksa last week, 11 Sri Lanka Freedom Party (SLFP) ministers in government vehemently opposed any move of forming an alliance with members of the Joint Opposition. Ministers Mahinda Amaraweera, Duminda Dissanayake, Vijithamuni Soyza, Piyasena Gamage, Mahinda Samarasinghe, and Lasantha Alagiyawanna are among the 11 ministers.

Meanwhile, several SLFP members, who accompanied the President during his official visit to the Seychelles last week, had lengthy discussions with the President over this issue, stating that no form of alliance should be formed with the Joint Opposition.

Both the Rajapaksa and Sirisena factions now maintain that the recent meeting between them was to discuss the alleged assassination plot targeting the President and members of the Rajapaksa family.
Be that as it may, it is now learnt that the SLFP and the United National Party (UNP) seniors are discussing the possibility of moving forward with the current coalition to contest the next presidential and general elections.

February 8, 2022 byAazam Ameen No Comments
National Director of Mrs. Sri Lanka for Mrs. World Chandimal Jayasinghe today denounced the title of Mrs. Pushpika De Silva who was crowned on the 4th of April 2021 as the "2021 title holder of Mrs. S

October 10, 2021 byRuwani Fonseka No Comments
Earlier today, a suspect was arrested in connection to possessing and storing explosives illegally, to which The Morning contacted Police Spokesperson SSP Nihal Thalduwa today (10) who clarified as to