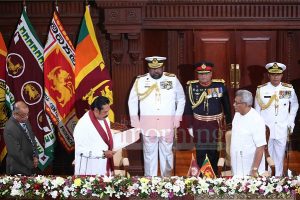 Former President Mahinda Rajapaksa was sworn in before President Gotabaya Rajapaksa today as the 23rd Prime Minister of Sri Lanka.

The swearing in ceremony took place at the  Presidential Secretariat.

July 12, 2022 byNews Admin No Comments
EU says it is monitoring developments and transition