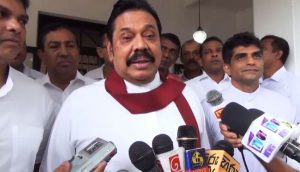 Prime Minister Mahinda Rajapaksa is to travel to India next month for talks with Indian Prime Minister Narendra Modi, The Sunday Morning learnt.

This will be the third high-level visit to India by a member of the new Government.

Sources at the Prime Minister’s Office said that Rajapaksa is expected to travel to India in early February but the dates were yet to be finalised.

India is keen to establish closer links with the Government of President Gotabaya Rajapaksa and offer financial assistance to develop the country, particularly the Tamil-dominated North and East and estate community areas.

Prime Minister Mahinda Rajapaksa’s India visit will come as the Tamil National Alliance (TNA) continues to push for a political solution for the Tamils which includes the full implementation of the Indian-brokered 13th Amendment to the Constitution.

During President Gotabaya Rajapaksa’s visit to India, the Indian Prime Minister had noted the importance of implementing the 13th Amendment to the Constitution.

22nd Amendment Bill: Is it the solution for political reforms?

August 14, 2022 byNews Admin No Comments
Legal experts and political analysts last week opined that the proposed 22nd Amendment to the Constitution failed to rectify the shortcomings of the 19th Amendment (19A) and may result in a political

March 16, 2022 byNews Admin No Comments
The Energy Ministry noted that if people stop buying large quantities of fuel including diesel due to undue fear, fuel stocks could be managed without giving rise to a shortage.