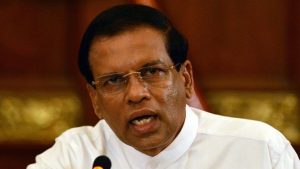 Speaking at the Sri Lanka Freedom Party (SLFP) Convention held in Matale yesterday, the President said that Wickremesinghe had attempted to mislead the public by claiming that he called for the special Cabinet meeting last week.

He said that Minister Ravi Karunanayake had telephoned him twice on Thursday (19) morning, saying the Prime Minister wanted a special Cabinet meeting.

The President said that he had advised Karunanayake to tell the Prime Minister to call him.

However, the Prime Minister had not contacted him, so he called Wickremesinghe who said he wanted a Cabinet meeting to be called to discuss the executive presidency.

The President said that he agreed to call for the Cabinet meeting that afternoon but when the meeting was held, several ministers objected to the proposal put forward by the Prime Minister to abolish the executive presidency.

He said that as things got heated, he ended the meeting prematurely and told the United National Front (UNF) to sort their issues out on their own.

The President also hit out at the Prime Minister over the appointment of Dilrukshi Dias Wickremasinghe as the Director General of the Commission to Investigate Allegations of Bribery or Corruption (CIABOC).

He said that a leaked telephone conversation involving Wickremasinghe, who is now Solicitor General, raised questions over investigations conducted by her.

The President also said that the Prime Minister had proposed that she be appointed as a top judge.

March 23, 2021 byLahiru Pothmulla No Comments
The Media Organisations Collective today expressed concerns over several remarks made by President Gotabaya Rajapaksa on media freedom and the conduct of some media institutions.

November 17, 2020 byNethmi Liyanapathirana No Comments
No state ceremonies or events will be held to mark President Gotabaya Rajapaksa’s first-year anniversary in office on 18 November, in keeping with the policy set out by the President, it was reported.