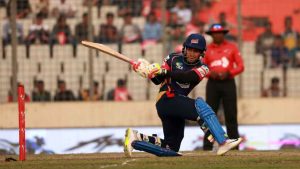 Chittagong Vikings withstood Thisara Perera’s blistering assault at the end of the first innings to pull off a thrilling chase of 185, on the back of Mushfiqur Rahim’s sensational 75 off 41 balls to win with two balls to spare.

A stuttering start to the match by the Victorians cost them in the end as they managed just 33 for 2 in their first six overs, with Evin Lewis struggling to get going before eventually retiring hurt. Thisara gave them hope with his thunderous six-hitting, but he was outshined by Mushfiqur, who paced his innings brilliantly after taking over from the hot start offered by Mohammad Shahzad.

Robbie Frylinck, who had been hammered by Thisara for 30 runs off the 19th over of the first innings, redeemed himself by scoring the winning runs. Entering after the fall of Mushfiqur at the end of the 19th over, Frylinck hammered a six over midwicket with two balls to spare to seal the match.