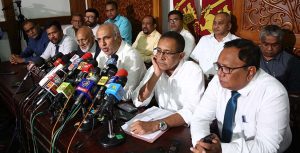 Muslim Parliamentarians who resigned from their Ministerial portfolios have decided to accept their posts once again.

The Muslim MPs resigned from their portfolios in early June with the intention of allowing authorities to carry out their investigations with regards to the Easter Sunday attacks.

The MPs came to this collective decision during a meeting held yesterday.

The Muslim MPs, including those from the Sri Lanka Muslim Congress, had also voted against the no-confidence motion on the Government in Parliament yesterday (11).

May 15, 2020 byTSM Web Desk No Comments
The Ministry of Fisheries and Aquatic Resources Development has taken steps to develop 18 lagoons around the country, including those which were abandoned due to the war in the Northern Province.

No hike in COVID patients from Pamunuwa, Maharagama after festive season: PHIs

April 20, 2021 byMihi Perera No Comments
There has still not been a hike in the COVID patient rate in Pamunuwa and Maharagama, despite a crowd gathering there during the festive season, stated area Public Health Inspector Thusitha Bandara.