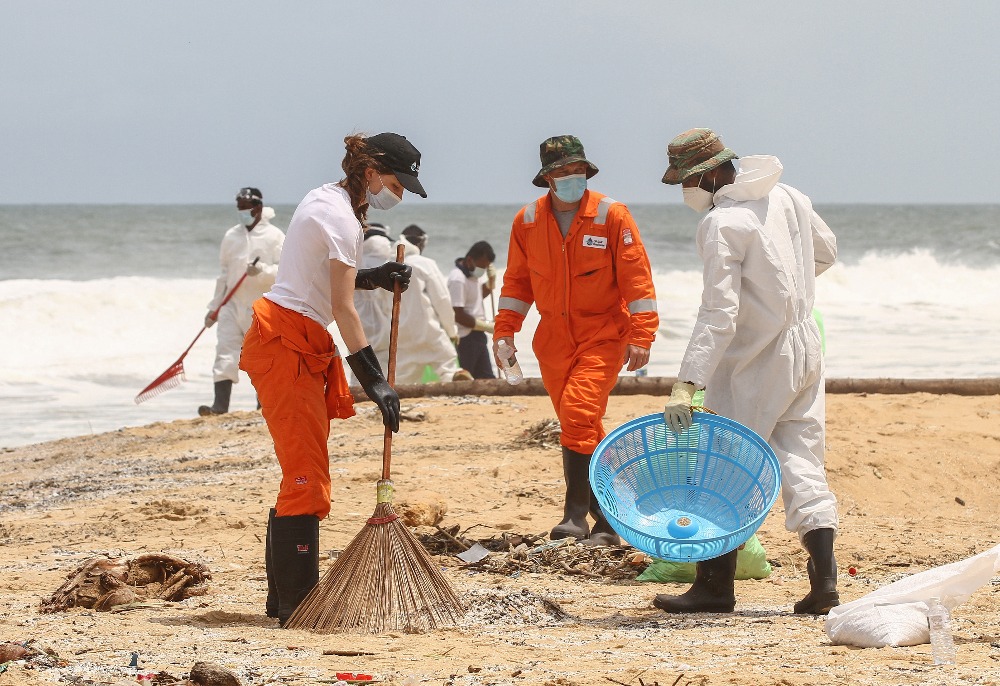 The seafood export industry in Sri Lanka is yet to feel a major impact of the unfolding environmental disaster caused by the half sunken cargo ship MV X-Press Pearl that had been loaded with chemicals. Seafood exporters, however, have expressed concerns over a long-term impact.

For exporters, business runs as usual despite some shortages in supply of small fish varieties, mainly due to the fishing ban in several areas following the disaster.

However, The Sunday Morning learnt that some concerns have been raised by main buyers, especially in Europe, regarding the safety of fish exported from Sri Lanka.

“The effect as of now on the seafood export industry can be measured as 5-7% with the adverse effect on shallow-water fish, as there had been a short supply due to some restrictions put forward by the authorities. But other than that, we have no impact whatsoever. Especially for tuna, the impact is zero,” Seafood Exporters’ Association of Sri Lanka (SEASL) Secretary Viraj Balapitiya told The Sunday Morning.

Explaining further, he said that even though there had been no short-term impact on the tuna industry, there could be an adverse effect in the future if the fish breeding centres in shallow water are contaminated with chemicals.

Balapitiya, who is also the Jay Sea Foods Processing (Pvt.) Ltd. Director of Finance, said: “We are engaging in the tuna fish business, which is operating 300 nautical miles away from the shore by deep-sea fishing boats. Therefore, we have no impact whatsoever. However, a few of our foreign buyers like Israel, at their border point, had concerns regarding the safety of our fish, but we managed to get a letter from our Department of Fisheries to the Israel authorities, so it’s cleared.”

Highlighting the damage caused by social media, Balapitiya stressed that lots of wrong information making the rounds on social media has become one of the main challenges.

“There were posts about mercury contamination, which is false, as mercury cannot be deposited in canned fish in one or two days. So at present we can’t have such an effect on seafood,” he added.

Elaborating further on the future impact, the SEASL Secretary noted that even though there wouldn’t be an adverse effect on the tuna industry, some members of the association have issues with prawns and blue swimming crabs. “Those areas have been adversely affected,” he added.

Economically, the share of fisheries to the gross domestic production (GDP) of the country is around 1.3%, and it provides direct and indirect employment opportunities to about 560,000 people and livelihoods for more than 2.7 million coastal communities, according to NARA.

From a social perspective, it provides more than 60% of the animal protein requirement of people in the country.

Meanwhile, the National Aquatic Resources Research and Development Agency (NARA) is currently conducting research on the safety of seafood consumption. However, the complete report is to be released on Tuesday (22).

Speaking to The Sunday Morning, NARA Chairman Prof. A. Navaratnerajah stated that whether or not seafood was safe to eat could only be confirmed after looking at the laboratory results which would be issued on Tuesday.

“We are conducting tests and we are monitoring the situation. As of now, the suspected areas have been banned from fishing and the fish that are in the market from other parts of the country,” he said.

According to Prof. Navaratnerajah, NARA would be monitoring the situation continuously.

“As a short-term precaution, continuous tests would be conducted for six months. But our plan is for five years,” the NARA Chairman added.

When queried about the possible effects on fish breeding grounds, Prof. Navaratnerajah stressed that the chemical effects could only be confirmed following the tests.

Minister of Fisheries Douglas Devananda told the media last week that the restricted areas will be released in a phased-out manner in the immediate future for fishing, as the Negombo Lagoon will no longer be hampered, as NARA and the Atomic Energy Authority have confirmed that no oil or chemical has been dumped on the ship.

Coastal and ocean clean-up operations are being carried out to ensure that fishing is not a problem. The Negombo Lagoon and the Hamilton Canal were being cleaned, too, the Minister noted.

He also said that compensation will be paid in the future due to the damage caused to the fishing community.

The X-Press Pearl had been carrying 25 tonnes of nitric acid, along with other chemicals and cosmetics, when it caught fire on 20 May. Many of the ship’s 1,486 containers tumbled into the sea before the huge blaze was put out. The 186 m-long (610 ft.) X-Press Pearl left the Indian Port of Hazira heading for Colombo on 15 May. The fire broke out when it was anchored off the Colombo Port. The cargo ship had been on fire for two weeks near the Port of Colombo. Part of the hull has now settled on the seabed.

The X-Press Pearl contained 278 tonnes of bunker fuel oil and 50 tonnes of gas oil. There are also about 20 containers full of lubricating oil.

Pollution from the ship – including millions of plastic pellets which are the raw material for shopping bags – has already coated stretches of Sri Lanka’s western coastline. Experts say the pellets still in the sea could travel as far as India, Indonesia, and Somalia.

Sri Lankan officials believe the fire was caused by a nitric acid leak. However, the investigations are currently underway.

September 1, 2019 byThe Sunday Morning No Comments
Two global religious world leaders were in Sri Lanka last week carrying a message of hope as the country recovers from the deadly Easter Sunday attacks which killed over 250 people.

The BOI implosion and the sad story behind it

December 16, 2021 byNews Admin No Comments
The hijinks that went on at the Board of Investment (BOI) were bizarre even by the standards of what’s going on these days. The entire institution was brought to the brink of chaos, at a time the coun