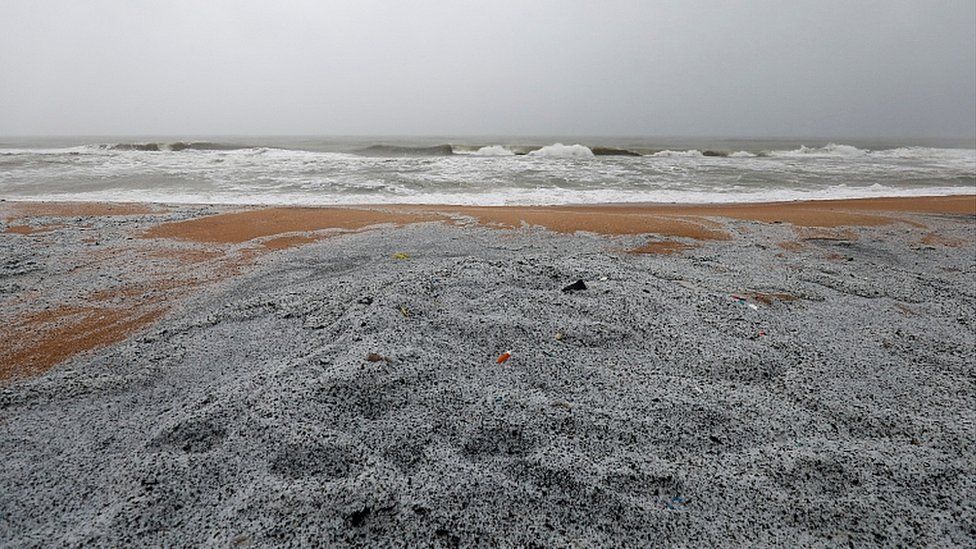 Despite having its flames extinguished, the MV X-Press Pearl wreckage is still wreaking havoc on Sri Lanka’s marine life, and the country’s tourism industry fears that its ripple effects may impact them in the mid to long term.

Speaking to The Sunday Morning, experts expressed their concerns on the impact the disaster might have on the industry. While some fear that these impacts will be felt in the years to come, others hope for a more optimistic future.

The chemical-laden MV X-Press Pearl caught fire 9.5 nautical miles from the Colombo Harbour on 20 May, giving rise to one of Sri Lanka’s biggest environmental disasters. The cargo ship continued to burn for 12 days before finally sinking on 2 June.

The incident ended up releasing several toxic substances into Sri Lankan waters, which included 78 tonnes of plastic pellets that have spread around almost one-third of the coastline from Galle to Kalpitiya, 25 tonnes of nitric acid, and various chemical and cosmetic products that have since covered the sea surface on the Western coast of the country.

While clean-up efforts were introduced, the impact on marine life is only now being felt, as carcasses of fish and dead mammals such as dolphins, and sea turtles, are being washed ashore.

Furthermore, local experts have told foreign media that the toxic chemicals in the ship can cause severe damage to the coral reef, which may lead to them dying, eventually making it a region that may take years to regenerate.

Speaking to The Sunday Morning, Sri Lanka Tourism Development Authority (SLTDA) Director General Dhammika Wijesinghe stated that while the true impact on the industry is currently difficult to quantify, there will most likely be an immediate financial impact and a mid to long-term economic impact on the industry.

She explained the immediate impact will be felt by stakeholders dependent on seafood, while the mid to long-term impact will be due to the effects on the seven tourism zones it encompasses.

“We have to look at this on two fronts, the first is the impact on our seafood, which has become a favourite amongst tourists entering the country. The second is coastal pollution impacting seven out of 15 declared tourism zones and the devastating effects this is having on marine life.”

Wijesinghe stated that while the immediate financial impact on the industry due to concerns on Sri Lanka’s seafood is worrying, her real fear is the impact on the country’s marine life.

She explained that the impact of the latter will probably only be felt in the next eight to ten years, making its effects long-term.

“We are seeing a lot of carcasses being washed up ashore, and among them are marine mammals such as sea turtles who attract a lot of tourists. If we take these animals, we are only seeing the adults being washed ashore, but that is because the dead hatchlings aren’t making it back. So, the real numbers can be up to thousands, but we will only feel it in the years to come.”

Moreover, Wijesinghe also pointed out that there has been a total of 34 dolphin carcasses being washed ashore as of 16 June, another favoured species among wildlife tourists entering the country.

She explained that these creatures are highly sensitive and can sense danger and changes in water quality, which might lead them to move away from Sri Lanka waters.

She stated that most of the country’s coastal tourism depends on the rich biodiversity within its waters. Therefore, she stated that investors in the industry have expressed their concerns over their investments, and are asking the SLTDA how long this might affect the environment.

Similar to Wijesinghe, The Hotels Association of Sri Lanka (THASL) President Sanath Ukwatte stated that the local hoteliers are also concerned about the environmental damage caused by the wreck, and its potential impact on the country’s tourism.

He explained that since the disaster is being watched all over the world, it has caused concern amongst potential visitors to Sri Lanka. However, the true impact is hard to quantify.

“As far as THASL is concerned, we are still studying the situation. We can see that both the Army and Navy have done a very good job clearing the beaches, and as for the true impact on marine life, we are closely following the reports of marine experts. So, we don’t want to make any assumptions on the impact on the industry just yet.”

Ukwatte stated that there are currently no tourists entering the country, and therefore, they are looking forward to a better season from December 2021 onwards. He went on to state that despite these concerns, he expects the situation to have blown over by then.

When contacted to find out how long it would take for the local seas and coastal regions to return to normal, several marine biologists, including those in the National Aquatic Resources Research and Development Agency (NARA) and marine biologist Dr. Asha de Vos, informed us that not enough information is available for them to make any assumptions.

April 16, 2022 byNews Admin No Comments
Despite a hurried attempt by authorities last week to reassure the public that investigations into the 2019 Easter Sunday terror attacks have yielded positive results prior to this year’s Easter obser

February 5, 2022 byNews Admin No Comments
Despite previous assurances from the Ministry of Justice that an Amendment Bill to the Muslim Marriage and Divorce Act (MMDA) would be presented to Parliament by January this year, it is learnt that t