November 5, 2021 by Dimithri Wijesinghe No Comments

If you are a travel enthusiast keeping an eye out for new and innovative travel content, then it is highly likely that you’ve come across Nadun Tennakoon’s “into the jungle”. You may recognise it as that one video with the dog, Nadun’s gorgeous labrador that accompanies him on his travels. 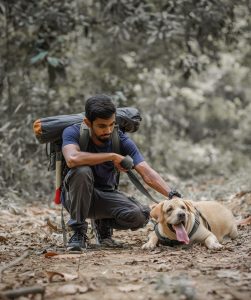 If you are a lover of the great outdoors, then you are sure to enjoy Nadun’s content, often focused on his adventure travels – his many camping trips captured in a rather unique way, setting itself apart from the majority of the travel content out there. Nadun’s content focuses on the tranquility of nature and the calm it has to offer. As a former Cadet and Boy Scout, Nadun is a nature-lover who pays a lot of attention to the greenery around him.

Speaking to Nadun about his foray into the world of travel, he shared that his experience as a Cadet and also a Boy Scout really opened his eyes to travelling and exploring. He said that when he was just 16 years old, he would guide his friends to various destinations around the island, particularly his home town in Badulla.

“I grew up in the middle of Passara and Lunugala, surrounded by mountains and hilltops. It was only natural for me to climb up and all over those mountains, and that was my upbringing,” he shared, noting that it really felt like the next natural step to get into exploring the rest of the island. 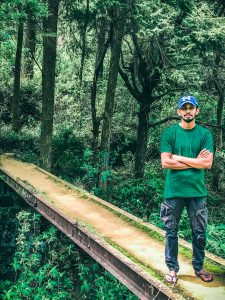 He said that he was so accustomed to travel and the experiences he gained from cadetting and scouting made him an incredibly prepared and safety-oriented traveller, which then made it so that it encouraged others to want to travel with him, as he is always prepared – if you ever get injured, he has you covered.

He also shared with us that he has had some incredible experiences in his life, thanks to his involvement in travel, one such experience being the long and arduous journey he endured with a group of friends as they attempted to clear Dehena Kanda (mountain) leading up to Sri Pada. The journey was spent almost entirely submerged in water, repeatedly bitten by leeches. However, Nadun happily said that it was unforgettable and he doesn’t regret a moment of it.

Currently a first-year university student studying mechanical engineering at the Uva Wellassa University, Nadun said that despite having some trouble getting out with most of his classes being online, in the past, he would make it a point to get out of town multiple times a month. 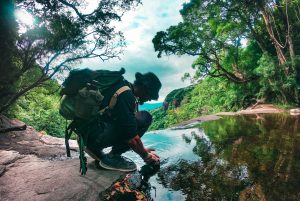 He also shared with us the story of how his YouTube channel came to be, providing that a while back he was in the middle of hustling hard for his cousin’s channel that was attempting to reach some big numbers. Nadun was a primary curator for that channel and he enjoyed doing it. But he said that because he got to see that social media is more challenging than it may appear to viewers, he never had a thought of starting his own. However, once the peak of that hustle came to an end, he felt he had learned quite a lot and thought of putting some of his newly acquired knowledge to use.

Speaking about all of the content he creates, his YouTube videos, and, of course, the Instagram profile which is a happy by-product of his video production, regardless of how much the channel grows, Nadun said he only wishes to maintain travel as a hobby – an exploration of his passion – and as such doesn’t have any other grand plans for it. For now, he said, he simply enjoys doing it with no alternative agenda.