Minister of Youth and Sports Affairs Namal Rajapaksa has made it clear that he is ambitious in driving Sri Lanka’s sports towards a profitable industrial structure, which is going to be worth $ 1 billion during his five-year tenure. 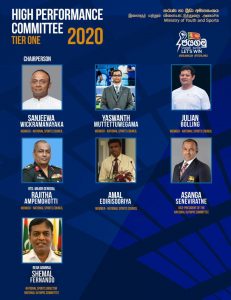 His agile approach during the height of a debilitating pandemic where sports become miniscule in social life, the sensitivity he has shown to those who are in need, and his enthusiasm and commitment have been evidently exceptional during his first two-and-a-half months in office.

But there were specific public expectations with regard to Sri Lanka’s sports when Gotabaya Rajapaksa was elected President and the Sri Lanka Podujana Peramuna (SLPP), headed by Prime Minister Mahinda Rajapaksa, was awarded a two-thirds majority in Parliament some months ago.

Uniting a nation, creating opportunities for the underprivileged, and regaining pride and confidence in a nation through sports (like in the late 1990s) could be the main objectives of the masses.

The new Sports Minister, who hails from the village but knows both the good and the bad of the city while representing Sri Lanka at the highest level as a sportsman himself, cannot find it hard to understand those public aspirations, we believe.

His mysterious approach to cricket

Sports wise, ours is a cricket-centred country. It’s the key sport of both the villager and the urbanite. It’s the sport that defies all social divides here, in a racially sensitive context. As a sports minister, if you fail in cricket, you are bound to fail in everything.

But, alas, Minister Namal, who was quick to disband a body like the National Ballet Association, has so far shown a strange and mysterious approach towards Sri Lanka’s cricket. Is he indicating to us that “it’s well and truly in good hands”?

His bigger ambitions at stake

The “post-or-amidst” pandemic world will come alive soon. International sports will adapt to the new norm, if it has not already. How Sri Lanka is going to perform in world cricket is going to decide our young Sports Minister’s making or breaking. Will his industry-oriented vision augur well for something like our cricket? Or, will it only fuel the corruption that is already rich in our sports?

The committees are all good, but the taste of pudding will be in the eating, as they say. If he fails, it is not only the Sports Ministry he will lose. People know well enough that this young Rajapaksa has bigger, longer term political ambitions, and all such hopes will be at stake as well.

Lankans go down without a fight

January 6, 2021 byRusiru Keppetipola No Comments
Rookie Lutho Sipamla tore through the Sri Lanka tail to set up a chase of 67 for South Africa