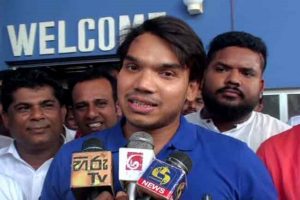 Opposition Parliamentarian Namal Rajapaksa has demanded an explanation from President Maithripala Sirisena for “false accusations” levelled at the Rajapakse government over the Lotus tower project.

Rajapaksa taking to his twitter handle said the President owes the Sri Lankan public an explanation about “his random, careless & completely false accusations” regarding the Lotus Tower project.

He further said, “Politics aside, I believe every Sri Lankan expects the country’s leader to be more responsible.”

The President speaking at the opening ceremony of the Lotus tower on 16 Sep claimed that in 2012 a Chinese company; Aerospace Long-March International Trade Co. Ltd (ALIT) had been paid a sum of Rs. 2 bn by the Rajapakse Government as part of the deal for the lotus tower project.

However, Sirisena said, once he became President, there was no sign of the said Chinese company nor the Rs. 2 bn.

The Ambassador of Sri Lanka to China Dr. Karunasena Kodituwakku in a clarification letter has contradicted the President’s claims.

Kodituwakku said ALIT had moved to another address.

Meanwhile, ALIT also issued a statement today(21) saying it had withdrawn from the project and that all funds allocated for the project had been given to the main Chinese contractor.

According to ALIT, TRCSL had paid USD 15,644,980 as advance payment to the account of China National Electronics Importers & Exporters Corporation (CEIEC) in China Export-Import Bank of China on the 9th of October 2012.

ALIT and CEIEC had formed a consortium in August 2010 to pursuit the Lotus Tower project and the contract was signed in January 2012, the statement said. “On Aug. 2015, the ALIT entrusted CEIEC to act solely on its behalf to fulfill the contract. Those are normal business operations and comply with international business practice,” ALIT said.

The company said the inauguration of the Lotus Tower project is “not only a remarkable milestone of the project but also a significant symbol of friendly cooperation between China and Sri Lanka.”

#SriLanka President @MaithripalaS owes the Sri Lankan public an explanation about his random, careless & completely false accusations regarding the Lotus Tower project. Politics aside, I believe every Sri Lankan expects the country’s leader to be more responsible. pic.twitter.com/3qXe0tdO3Y

May 9, 2022 byNews Admin No Comments
Note enjoyment of privileges on taxpayer funds will cause severe backlash