Naomi Osaka: US Open title ‘not the happiest moment’ 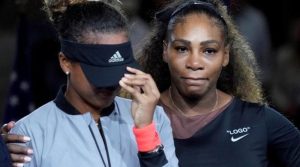 Naomi Osaka says winning the US Open last month was a “bittersweet” moment and “not the happiest memory” following Serena Williams’ on-court outbursts.

The 20-year-old became the first Japanese player to win a Grand Slam when she beat the American 6-2 6-4.

But the final at Flushing Meadows was overshadowed when Williams called umpire Carlos Ramos a “thief” and later accused him of sexism.

“There’s a lot of stuff I want to say about how I felt,” said Osaka.

World number six Osaka has always refused to point the finger at 23-time Grand Slam champion Williams, 37, but said she had immediately wanted to “move on” following her win in New York.

“Right after, the day after, I really didn’t want to think about it because it wasn’t necessarily the happiest memory for me,” she said. “I just sort of wanted to move on at that point.

“Of course I’m happy that I won a Grand Slam, I don’t think there’s anything that can take away from that, but I feel like it was so strange, I didn’t just want to think about it.

August 11, 2021 byRevatha No Comments
Another sad demise due to Covid-19

September 21, 2020 byRevatha No Comments
Bangladesh Cricket Board on Sunday (20) announced that a men’s team player has been isolated after showing 'Covid-like symptoms' before their Sri Lanka Test tour