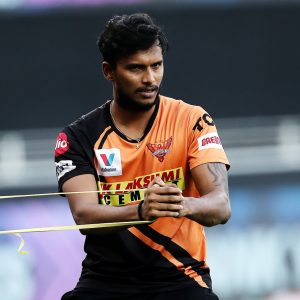 Six other members of the SRH squad identified as his close contacts have been isolated. The organisers of the tournament, the Board of Control for Cricket in India (BCCI), however, said the DC vs. SRH match would go on as per schedule in Dubai as the rest of the SRH squad members had tested negative.

Then how the 30-year-old Natarajan alone got positive for the deadly virus remained a problem last night.

Left-arm seamer Natarajan, who is returning from a long injury lay-off, is currently asymptomatic, reported the Hindustan Times yesterday.

“Sunrisers Hyderabad player T. Natarajan tested positive for Covid-19 at a scheduled RT-PCR test. The player has isolated himself from the rest of the squad. He is currently asymptomatic,” the report further added.

“The medical team has identified the below mentioned six close contacts of the player, who have also been placed in isolation,” BCCI said in a release.

The BCCI added that all the other members of the SRH squad, who went through RT-PCR tests early on Wednesday had tested negative.

“The rest of the contingent including the close contacts underwent RT-PCR tests at 5 a.m. local time and the test reports are negative. As a result, tonight’s (last night’s) game between Sunrisers Hyderabad and Delhi Capitals will go ahead at the Dubai International Stadium, Dubai,” BCCI added.

As per the IPL’s Standard Operating Procedure (SPO), Natarajan will now have to isolate for 10 days and test negative twice before being allowed back into the bubble.

For the second time

The development is a major blow to SRH, who could not avail his services in the first leg due to injury. The 30-year-old Natarajan has 20 IPL wickets from 24 matches that he has played.

The IPL resumed here on Sunday (19) after it had to be halted in May due to multiple Covid cases in its bio-bubble when the event was being staged in India.

Even at that time, SRH was affected when senior wicketkeeper-batsman Wriddhiman Saha tested positive.

The IPL resumed in Dubai on Sunday with defending champions Mumbai Indians taking on Chennai Super Kings, after it had to be halted in May due to multiple Covid cases in its bio-bubble when the event was being staged in India.

July 27, 2021 byRevatha No Comments
The historical snippets on the Olympics 2020