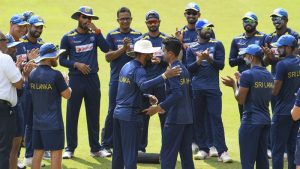 Sight is set on the next World Cup, the 50-over International Cricket Council (ICC) flagship event, which is to be held in India in 2023. It is reliably understood that the Sri Lankan national cricket selectors, headed by Pramodya Wickramasinghe, have set their plans to infuse young blood to the national short-format team with their focus on the 2023 World Cup.

The process is understood to be beginning almost two hand half years before the mega event, with the forthcoming white-ball series against Bangladesh and England.

The Morning Sports reliably learnt yesterday that several senior cricketers of the Sri Lanka ODI side will be dropped for the scheduled ODI series in Bangladesh later this month and the England white-ball series, to be held from 23 June.

“The selectors want to give opportunity for young players, so it’s likely that several senior players will get dropped from the side and a final decision will be taken in the next few days,” the said SLC official further revealed.

Current T20I national Skipper Dasun Shanaka will most probably be considered for replacing Karunaratne in the Sri Lanka ODI team.

The probable line-up of youngsters who are to be included in place of the above-said veterans would be Chamika Karunaratne, Ishan Jayaratne, Mahesh Theekhana, Avishka Fernando, Dhananjaya Lakshan, Angelo Perera, and Binura Fernando.

The source further added that present seniors in the national limited-over side such as Kusal Perera, Dhananjaya De Silva, and Isuru Udana are to retain their places.