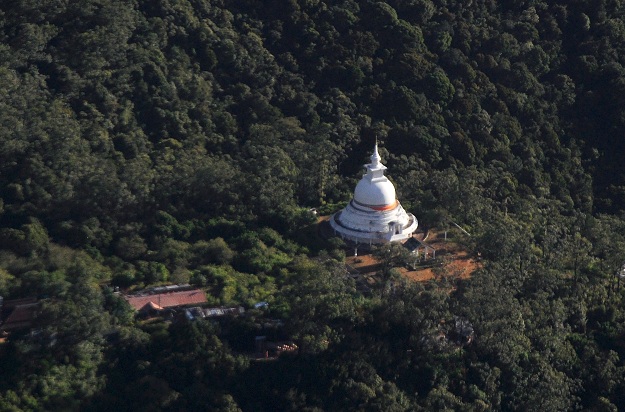 Will we ever learn to protect its richness?

With Vesak just ending, one of the many locations that didn’t see the usual visits by crowds of adoring Sri Lankans during this season is our greatly venerated Adam’s Peak, also known as Sri Pada. While many go on pilgrimage to Adam’s Peak, it is also visited by locals who enjoy travel and adventure and wish to embark on the rather difficult hike up to the peak of the Samanalakanda.

Asian Ecotourism Network Board Member Srilal Miththapala shared that while this location is a must-visit for almost every local, unlike many other parts of Sri Lanka, it is not a big tourist hub. He said that usually only diehard foreign tourist hikers and such visit Adam’s Peak, and even then it isn’t the most popular hiking location in the country.

As such, the majority of the tourists in the area are local. Unfortunately, however, while we may be expected to keep our own treasures safe and beautiful, that is not the case with our beloved Adam’s Peak, despite it being a sacred location to many.

Department of Wildlife Conservation (DWC) Ranger of the area B.P. Siyasinghe confirmed that the biggest season for Sri Pada is between December and May, usually ending on or close to Vesak Poya. 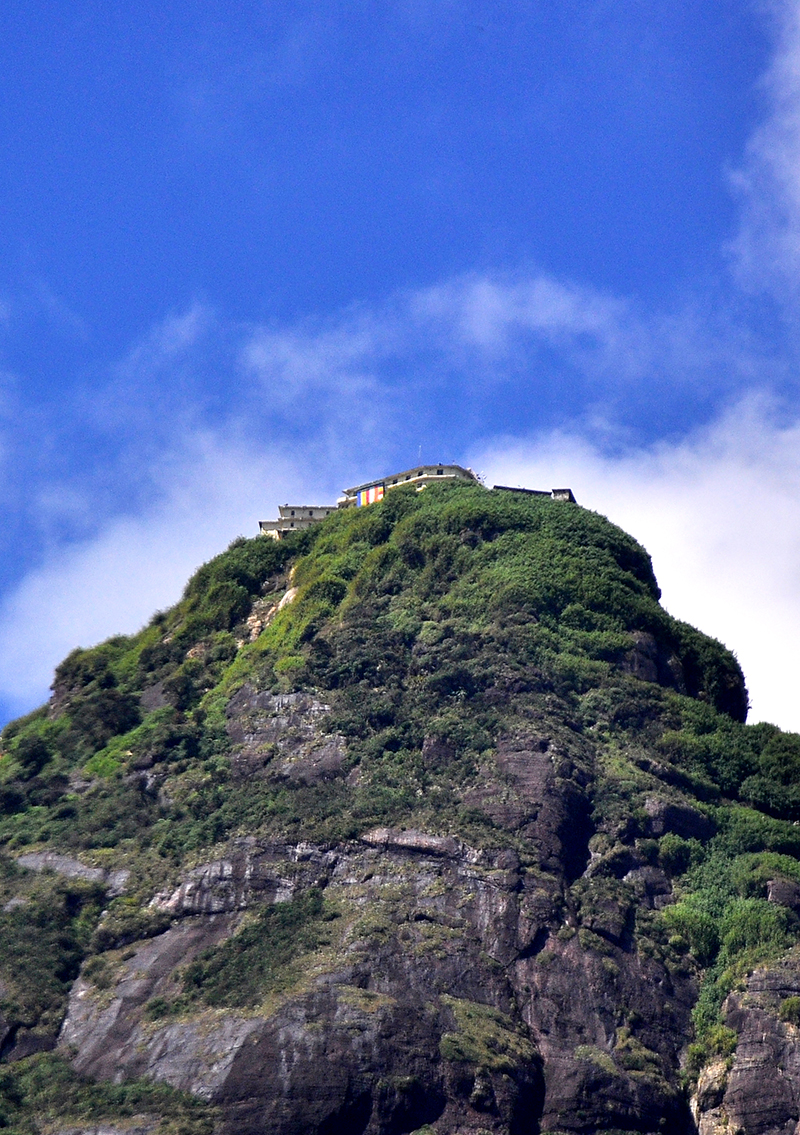 This year, however, as a result of the curfew, this location was visited during only half this season. Siyasinghe said that even though updates about the pandemic were causing panic long before the Government took action, people were visiting until such time they couldn’t.

This was telling one of two things: Either people of Sri Lanka simply had no clue about the virus or they venerated the location so much that they had to visit it before any action was taken to stop them from doing so legally.

Unlike other places such as wildlife reserves where animals have started inhibiting the safari trails and plants have overgrown and covered up roads, Siyasinghe said the biggest change he noticed at Adam’s Peak was the reduction in polythene waste which usually gets collected in massive amounts.

The biggest issue facing Adam’s Peak is pollution. Siyasinghe said that many organisations have been helping the DWC clear up the waste carelessly thrown by visitors. While curfew was imposed and no one was allowed to visit the location, all of this waste has been cleared up and Adam’s Peak is as spotless as the rest of the mountains which surround it. 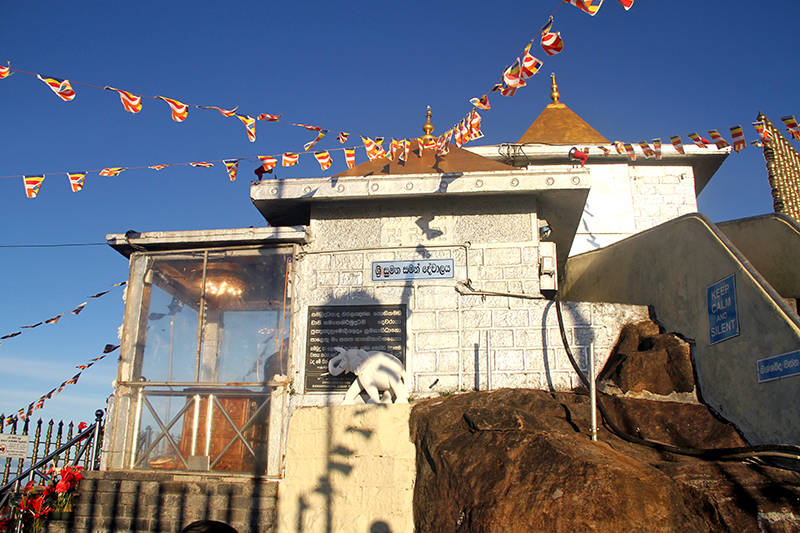 While the issue of littering is high up on the list of problems, another issue which adds on to this is literally removing things from the environment. Siyasinghe said that many people who get tired after reaching the top following the rather difficult climb, including elderly folk, break branches off trees to use as walking sticks. While this may not sound like much of a problem, he shared that the sheer amount of people who keep doing this makes it a true menace, thereby preventing these plants from growing.

He referred to this breaking of branches as a kind of deforestation in which the trees are actually prevented from growing freely, over and over again every year. Currently, however, similar to how the pandemic has caused trees to grow in other places, the trees at Adam’s Peak have been allowed to grow as freely as before and take their own course.

Siyasinghe pointed out another issue which pertained to the waterways. He said that just as the forest areas are being constantly polluted by visitors, so are the waterways; waste food items and such have been thrown into these waterways by people. Siyasinghe said that people don’t understand what an enormous amount of water they are polluting by doing this, in what may seem to them as small areas.

He referred to the area around the Samanala Mountain as the heart of Sri Lanka and justified this by saying that a majority of Sri Lanka’s waterways begin or pass through here. These waterways are the “circulatory system of the country”, which is being nourished by this particular mountainous location. This is taken for granted by many domestic tourists and pilgrims, he said.

“If water is polluted here, it will in turn pollute the water of the rest of the country and water is what is most important to everyone,” he said. He highlighted the immense importance of the waterways in these areas, speaking about the endemic fish found in the rivers at Samanala Mountain. Eight species of endemic fish have been recorded in this location, out of which Ceylon stone sucker and the banded mountain loach are the most common in these areas while being also endemic to these areas.

Apart from the fish, Siyasinghe also spoke of the many endemic birds in the area. The yellow-eared bulbul, dull-blue flycatcher, hill white-eye, Sri Lanka bush warbler, and arranga are few of the 33 endemic avifauna – or bird – species that can be found here. He also spoke of some endemic butterflies such as the Sri Lankan rose, Ceylon tiger, Sri Lankan birdwing, and tree nymph. Twenty-two species of dragonflies and damselflies are also present here, which are indigenous to Sri Lanka. Furthermore, seven species of freshwater crabs are found here, which are once again endemic. “These days, these creatures have no trouble,” added Siyasinghe.

Usually, an estimated two million people visit Adam’s Peak. Although this number may vary, the population visiting this location is undoubtedly large and naturally, this causes the animals to move away and hide in little areas. This increases the competition amongst them to survive, consequently resulting in the decline of animal populations.

However, presently, these animals have no trouble and are seen venturing and walking along paths which, under other circumstances, humans use. While the birds are singing merry tunes, much like in Yala National Park and other protected areas in Sri Lanka, Siyasinghe said that the other animals too have begun to roam around a little more freely than before.

It seems the leopard has been making a few unexpected appearances here and there. According to him, leopards are seen mostly from the side adjoining Hatton, commonly known as the Nallathanni entrance to Adam’s Peak. He recalled the black leopard sighting a little while before the pandemic, stating that these too come from this area. The funny thing, however, is that this location is occupied by people along its approximately 5 km stretch; it has the most amount of lodgings (some of which were of ancient times, known as ambalam).

Apart from the lack of human activity allowing the animals to regain their freedom and for space for the plants to grow, Siyasinghe said that the best sight at Samanalakanda now is the lack of plastic pollution. “It is how it should be,” he said. “After all, it is a UNESCO (United Nations Educational, Scientific, and Cultural Organisation) World Heritage Site, and we must keep it that way.”

Siyasinghe pointed out that the DWC tirelessly tries to maintain the environment at Adam’s Peak this way. They always monitor the people and try to get them to stop polluting, but they simply do not listen. It seems they just don’t understand the value of it.

To set things right, however, the DWC along with the Divisional Secretariat and other authorities in the jurisdiction have begun to think of ways to carry out awareness programmes about the location, hoping that at least then the people of Sri Lanka would understand the importance of protecting a location such as this; that it is not only of cultural and religious significance, but also has environmental significance. Siyasinghe said that a few programmes have already been conducted on an ad hoc basis, but they are still largely working on how to do this with pilgrims and other visitors.

He said it is truly a shame that people don’t always view this location as an environmental site but only think of it at a cultural location as this single peak has been popular for millennia. The truth is, as with most parts of Sri Lanka, Adam’s Peak isn’t singularly significant but rather a wonderful treasure important for a great many reasons.

Community Animal Population Control: How should we tackle it?

January 18, 2021 byRusiru Keppetipola No Comments
In 2006, during the 2,500th Sambuddhathva Jayanthi, President Mahinda Rajapaksa declared a “No Kill” policy. The official method to reduce the stray dog population is now through sterilisation..

Is education a key to economic recovery in Sri Lanka?