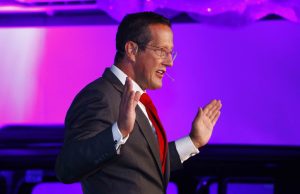 World famous CNN journalist Richard Quest advised Sri Lanka not to waste a crisis, referring to the opportunities presented by the tragic events of Easter Sunday.

“Never waste a crisis”, he said, quoting former UK Prime Minister Sir Winston Churchill. He was speaking as the Guest of Honour at the Cinnamon Future of Tourism 2019 summit being held today at the Cinnamon Grand Hotel Colombo.

Quest is CNN Business Editor at Large and anchors ‘Quest Means Business’ and several other popular business and travel shows to a global audience.

These sentiments were endorsed by Prime Minister Ranil Wickremesinghe who was also in attendance as the Chief Guest.

“We all got together and decided we will get the numbers up before the winter season. We achieved some things which could not be achieved earlier, for example reducing the ground handling charges at the airport. Maybe as Winston Churchill said crisis is an opportunity. We reacted much faster in a month than I could have in 6 months’ time.”

The Government and the Sri Lanka Tourism Development Authority (SLTDA) reduced ground handling charges, the price of aviation fuel and the embarkation levy for six months in July.

February 6, 2022 byNews Admin No Comments
Things are looking up for tourism, as more and more tourists trickle in to experience Sri Lanka even as the world battles a new surge of Covid-19. Reports of plane loads of tourists arriving in Sri La

December 19, 2020 byCharindra No Comments
National Intelligence is a harbinger of economic progress and we must reverse the poor show we are putting on, which will otherwise result in decades of lost opportunities.