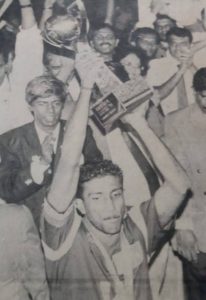 One of the finest moments in Sri Lanka’s football history – that was on 2 April, 1995. Sri Lanka beat India 1-0 in extra time of the final that day to win the Bristol SAARC (South Asian Association for Regional Cooperation) Gold Cup at Sugathadasa Stadium, Colombo.

* The 1995 SAARC Gold Cup began at the Sugathadasa on Saturday, 25 March 1995 in an extremely hot and humid day. Pakistan beat Bangladesh 1-0 in Group A in the curtain raiser

* India were the defending champions. They had won the previous SAARC Gold Cup in Lahore in July 1993. Sri Lanka were the runners-up then

* Sri Lanka played their first match on 29 March in a Group B game against India. Maldives withdrew from the tournament in the last hour and the game became the only Group B encounter. Well-known Bhaichung Bhutia featured in the Indian team

* Manilal Fernando headed local soccer administration then, flanked by stalwarts such as J.N.S. Anandaraja, Chrysantha Perera, Hafiz Marikar, and T. Wanigarthne. There were names like George Ferreira, Harold Anthony (Manager) and Rustam Akramon (the Uzbek Coach) too in the forefront

* On 29 March, Bhutia headed two goals for India to take lead. Then entered Amanulla who scored in the 62nd and 87th minute (a penalty) of the match to equalise. It was two all 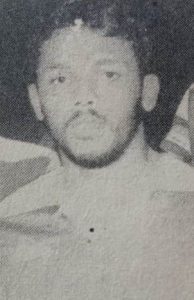 * It was the first time Sri Lanka had not been beaten by India since 1952, when the two countries drew 1-1 in Calcutta

* Sunday, April 2, the evening of the final against India turned out to a remarkable one in the country’s soccer history. The Sugathadasa was surrounded by tuk-tuks, cars, and other vehicles all crammed with fans carrying flags and flares

* The ground had been full to its 25,000 capacity and around 10,000 more were reportedly locked out causing problems for the security staff

* After a goalless first-half, there was rain and lightning. Yet play began soon in on a water-logged stadium

* There were no goals until 90 minutes; no sudden-death winners in the first period of extra time too. Amanulla had run out of ammunition and Roshan Perera was a marked man

* Cometh the moment of substitute W.L. David Sarath, a 25-year-old Corporal in the Sri Lanka Army who had come in, in the 68th minute, only to gain his first senior cap

* “In the 108th minute, about 12 minutes to 11 in the night, Perera broke down the left and his low-cross was met by Sarath whose diving header flew into the far corner. Match over. Sri Lanka champions. Rarely can a victory be celebrated so extravagantly,” wrote Leslie Fernando of The Daily News