The election is over and a strong and secure mandate has been provided to President Gotabaya Rajapaksa and the Government. The President has already announced that the new Parliament will be convened on 20 August and I congratulate all the members who will represent our citizenry in this Parliament. It is certainly going to define a new era for Sri Lanka if the newly elected members take it seriously.

Regardless of which party won or the composition of the government, Sri Lanka’s challenges were always going to remain unchanged. A new government cannot create a new Sri Lanka unless the government takes a new approach and starts to unlearn and undo the wrongs we’ve been committing for decades.

The official data released by the Census and Statistics Department just the day before the election indicated a 1.6% negative economic growth (economic contraction) in real terms in the first quarter (January-March). Considering the depreciation of the Sri Lankan rupee, in US dollar (USD) terms, it is approximately a 5% contraction of the economy in the first quarter. Sri Lanka took strict social distancing measures towards the end of March, so we have to expect further economic contraction in the second and third quarters. The new government’s biggest challenge would be realigning the economy.

According to the Export Development Board (EDB), exports have been picking up almost on par with last year’s exports, which is a big relief. A potential reason behind the recovery in exports could be the fact that India and a few competing countries have failed to manage Covid-19. As a result, some degree of production has been parked in Sri Lanka even though our cost factors are high. In the long run, we should be able to keep those orders on our shores by offering competitive prices. Otherwise, once those markets (India, Philippines, etc.) open and bounce back to normal, we will have to fall back to square one.

The EDB has expressed concern about the apparel sector’s ability in securing orders after August. Therefore, the new government has to get prepared early by starting negotiations with the International Monetary Fund (IMF) as soon as the new Parliament is summoned. Our neighbouring countries such as Nepal, the Maldives, Bangladesh, and Pakistan have already managed to secure IMF bailout programmes to overcome the brewing global economic crisis.

Over the last few decades, Sri Lanka has had emotional wounds which haven’t recovered yet. Over the years “suspicion of others’ religious and ethnic identity” has taken root amongst our fellow Sri Lankans and petty politics have ignited these fears in order to polarise Sri Lanka.

All political parties created suspicion between each other for their political advantage. Now, the very same suspicion has become the main bottleneck for us to move forward towards economic development.

In my view, this paranoia of suspecting each other is one reason why Sri Lanka is lagging in economic development, when compared to other competitive East Asian countries. For more than 30 years, our Sinhalese and Tamils were suspicious of each other and did not respect our diversity. This led to the creation of the LTTE, who also capitalised on these fears while all of us became victims and losers.

If you remember, thereafter tensions were created between religious groups for converting people to a different religion for financial incentives. The wounds are not yet fully healed between the North and South, and new tensions have erupted between Muslims, Catholics, and Buddhists.

Our suspicions go beyond that. Businessmen have been labelled as a group of people with an “only for profit” motive (“businesskaaraya”), regardless of the service and assistance they provide to our economy. Private enterprises have always been attacked for playing a villain’s role over the years. As a result, all our young graduates keep expecting government jobs.

Now, we are in a situation where our revenue is not adequate to pay the salaries, pensions, and social security expenses of the government. Going a step further, we have created suspicion on foreigners and foreign investors with the famous term “foreign conspiracy”, while completely disregarding diversity. Every white-skinned person has been labelled a threat for an invasion rather than an opportunity to explore opportunities for co-operation globally.

We are where we are now as a collective result of all these domestic perspectives. We all unanimously agree that we have played far below our potential and that we are a deeply divided nation.

We are further divided on political ideology, so much so that we kill each other and damage each other’s property. The new government has the challenge of undoing and unlearning these practices. “Suspicion” is the seed that can crack any relationship, friendship, partnership, or co-operation. Even in Buddhism, “suspicion” is considered an emotion to be treated with extra caution.

How can we create diversity without respecting diversity between people and all Sri Lankans? One of the main challenges for the new government will be establishing diversity and bringing everyone together in heart and in practice rather than spending years on documenting regulations and strategies. All political parties need to co-operate with the new government, as Sri Lanka is wounded beyond her threshold of tolerance. 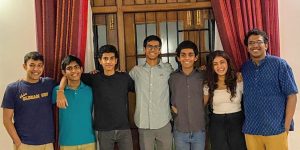 Sri Lanka’s national debating team became the runner-up in the World Schools Debating Championship by debating in a language which was not their mother tongue.

Making Sri Lanka an economically advanced nation can only be part of a broader strategy, which is dependent on making our economy competitive. To establish competitiveness we need to increase our productivity and efficiency. The game is like winning World Cup, where the only way to do it is to play well, and play better than all the other teams. The same applies to our economy. There are multiple ways to improve productivity and efficiency. We need to think on a global scale and produce in relation to global markets while joining the Fourth Industrial Revolution. That is the next challenge for the newly elected government.

The recent reality TV programme performed by teenagers which is getting popular across the world is one good example of the miracles as a result of competition and a competitive environment.

Young Sri Lankan teenagers proved that Sri Lanka can compete. Some of the young artists have not only challenged local original musicians but also western original musicians in their vocals and musical capacity. Some have been compared in foreign media for their performance and this is an indication that the younger generation is ready to compete and they have the fire to compete on the global stage.

Another event that made headlines was Sri Lanka’s national debating team becoming  the runner-up in the World Schools Debating Championship by debating in a language which is not their mother tongue – another good example of the benefits of competition and why Sri Lanka can compete on a global level if we pick our strengths right and create a competitive environment.

The new government should push Sri Lankans to work hard for free exchange and create an environment of opportunities for any individual to be successful regardless of religion, ethnicity, caste, or creed. Sri Lanka has been practising to avoid competition and be isolated from the world – the complete opposite.

The new government has the challenge of undoing and unlearning most of what we have been doing over the years. I wish all the courage to His Excellency the President, the new government, and the new Minister of Finance and all the strength to bring in the hard reforms and to put Sri Lanka back on the map.

(The writer is the Chief Operating Officer of Advocata Institute. He can be contacted at dhananath@advocata.org. Learn more about Advocata’s work at www.advocata.org. The opinions expressed are the author’s own views. They may not necessarily reflect the views of the Advocata Institute, or anyone affiliated with the institute)

June 11, 2021 byNews Admin No Comments
Sri Lanka can realise its development aspirations by promoting a private sector-led growth model – one that spurs further growth and creates jobs for its people through innovation and agility.