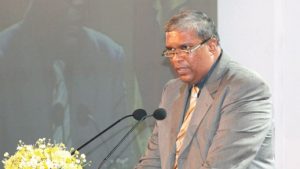 Prominent journalist C.A. Chandraprema is tipped to be appointed as the new Sri Lankan Ambassador to Geneva.

Chandraprema is a popular commentator as well as an author.

His expected appointment comes after the new Government under President Gotabaya Rajapaksa recalled a number of diplomats.

November 16, 2018 byEaswaran No Comments
Several Policemen and some Parliamentarians were injured during the chaos in Parliament today.

Taking Isurupaya to the districts

October 20, 2020 bySarah Hannan No Comments
Minister of Education Prof. G.L. Peiris, along with his ministry officials, launched district-level discussions to identify the challenges and issues in the country’s education system