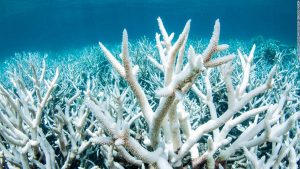 After the devastating revelation by the Marine Environment Protection Authority (MEPA) that 90% of Sri Lanka’s coral reefs were drawing their last breath, a ray of hope emerged as a new coral reef was discovered along the coast of Kankesanturai, Jaffna.

Spanning an area of 400 metres, the coral reef was discovered by professional divers of the Sri Lanka Navy.

As a high-security zone, the oceanic waters in Kankesanturai have mostly been protected from pollution and other human-induced harm.

“Due to the security provided by the Sri Lanka Navy, illegal fishing methods such as dynamite fishing rarely take place in these waters; the close proximity of naval presence has ensured the preservation of the coral reef,” he told The Sunday Morning.

“Corals are very sensitive creatures that cannot withstand pollution and the effects of devastating manmade, destructive activities,” he said.

Clear, clean water is essential for the survival of reefs. According to the Coral Reef Alliance (CRA), corals depend on clear water which would expose the reef to sunlight, and “they don’t thrive well when the water is opaque. Sediment and plankton can cloud water, which decreases the amount of sunlight that reaches the zooxanthellae”.

Zooxanthellae are photosynthetic organisms within the coral which contain chlorophyll “a” and chlorophyll “c”.

Further, the CRA states that “corals are sensitive to pollution and sediments. Sediment can create cloudy water and be deposited on corals, blocking out the sun and harming the polyps. Wastewater discharged into the ocean near the reef can contain too many nutrients that cause seaweeds to grow over the reef”. Previously giving his insight into marine pollution and its effects on coral reefs, Marine Environmental Protection Authority (MEPA) General Manager Dr. Terney Pradeep Kumara stated: “Practices such as coral trampling, which often go undetected, also harm the corals due to them being highly sensitive,” he said.

Corals are often subjected to trampling during activities such as snorkelling and scuba diving, which also have a significant impact on corals due to their extreme sensitivity. An article published by the British Ecological Society, named “Effects of Recreational Scuba Diving on Coral Reefs: Trampling on Reef-Flat Communities”, concluded that “there were significantly more damaged corals and loose fragments of live coral colonies in heavily trampled areas than in little-trampled areas. Percentage cover of bare rock and rubble was also significantly greater; conversely, numbers of hard coral colonies, and the total percentage in live coral cover were lower”.

The Lieutenant Commander said that it’s important to ensure the conservation and preservation of this coral reef by not letting the reef get subjected to undue pressures.

“Since the conclusion of the war, the priority of the Sri Lankan Navy has changed from its traditional role of security; now, we have been able to expand our concerns beyond naval security and our naval experts are currently doing a tremendous job in replanting dying corals,” Suriyabandara said.

He further stated that there is no personal objective of the Navy in conducting these operations and the whole country should take it up as their own responsibility to ensure the safety of the existing and newfound coral reefs.

Protecting the existing coral reefs, which are undergoing bleaching, remains one of Sri Lanka’s biggest challenges.

El Niño refers to a natural phenomenon that occurs when sea surface temperatures rise above normal levels over a period of time.

Marine biologist Asha de Vos stated that it is absolutely essential to reduce outside pressures to protect the coral reef. “Rising sea temperatures is something we cannot control. However, what we can control is reducing pollution and other outside threats, so that we ease off the pressure from the corals,” she said.

Coral bleaching happens when corals get subjected to extreme stress. According to a paper published by Arizona State University, when corals are under extreme stress, they push out the algae which help the coral photosynthesise, which in turn makes the coral white and lifeless due to the lack of food within its system. However, the paper suggests that if a coral reef survives the disastrous El Niño, with enough time and with the reduction of outside pressures, it may recover.

Sunny Side up: From tonic to capsules

May 9, 2021 byNews Admin No Comments
The much-touted concoction that was supposed to be a remedy for Covid-19, the “Dhammika tonic”, was last week deemed an unsuitable remedy to treat the virus.

May 3, 2021 byNews Admin No Comments
We dare you to walk into the kitchens of your neighbourhood eating houses – the type of place from which you frequently pick up kottu, rotti, hoppers, fried rice, etc. It is most likely that the filth