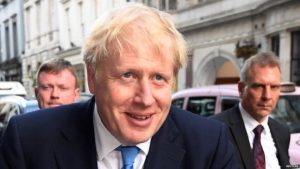 Boris Johnson will begin the process of forming his government later after he succeeds Theresa May as prime minister.

The new Conservative leader will take office on Wednesday afternoon following an audience with the Queen at Buckingham Palace.

After entering Downing Street, he is expected to announce a clutch of senior cabinet posts, including chancellor of the exchequer and home secretary.

He is expected to use the opportunity to increase the number of women in full cabinet positions and boost the representation of ethnic minorities.

Johnson won a decisive victory over Foreign Secretary Jeremy Hunt in a ballot of Tory members – gaining a 66.4% total share of the vote.

Conversations are said to be “ongoing” between Hunt and Johnson about the foreign secretary’s next role.

After his victory, Johnson said his priorities were to deliver Brexit, unite the country and defeat Labour leader Jeremy Corbyn.

The ex-mayor of London is expected to address the nation for the first time outside Downing Street at about 16:00 BST after accepting the Queen’s invitation to form a government.

That will follow Theresa May formally giving her resignation as prime minister at Buckingham Palace. BBC

FBI can question ‘anybody’ about Brett Kavanaugh: Trump

October 2, 2018 byMalik No Comments
President Trump has said he wants the FBI to conduct a "very comprehensive investigation" into sexual assault allegations against his Supreme Court nominee – but not a "witch hunt".

May 17, 2020 byTSM Web Desk No Comments
The Chinese ambassador to Israel, Du Wei, has been found dead in his home north of Tel Aviv, according to the Israeli foreign ministry and police.