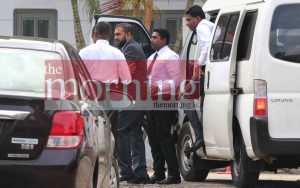 A new police team led by an Assistant Superintendent of Police (ASP) has been appointed to investigate Dr. Shafi.

This was revealed by the Criminal Investigation Department (CID) when Dr. Shafi’s case was taken up at the Kurunegala Magistrate’s Court this morning.

Following the CID’s statement, Kurunegala Magistrate’s Court has reportedly ordered the CID to re-record the evidence in the case against Dr. Shafi.

Govt. to deliver medicines to Gampaha and Colombo Districts

October 13, 2020 bythemorningeditor1 liberty No Comments
The Ministry of Health recommended patients with chronic diseases and the elderly to refrain from attending hospital clinics until further notice, as they are at higher risk of contracting Covid-19 du

AG refuses to appear for Ratwatte in SC case

October 21, 2021 byNews Admin No Comments
The Attorney General (AG) had refused to appear for State Minister Lohan Rattwatte and the Superintendent of Police in Anuradhapura in the case related to the fundamental rights (FR) petition filed by