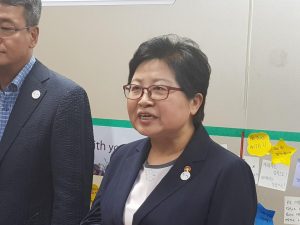 A research center aimed at studying the wartime sexual enslavement of women by Japan during World War II opened in Seoul on Friday.

The institute will compile and preserve historical records in a database relating to the victims, who are euphemistically referred to as “comfort women.”

The center is housed and operated under the Women’s Human Rights Institute of Korea, according to S. Korea’s Ministry of Gender Equality and Family.

“It is important to compile and centralize the results of objective, empirical research projects,” Minister Chung Hyun-back said during a ceremony marking the launch of the research center.

The institute will also serve as a hub for historical data from overseas, including China, Japan, and Southeast Asia and will publish and disseminate information to educate future generations.

“Next generations must correctly understand history and learn lessons not to repeat past wrongdoings,” Chung said.

The Japanese government, meanwhile, has reportedly expressed displeasure over the new research center.

According to Japanese broadcaster NHK, Japan’s foreign ministry has conveyed its position to S. Korean authorities through diplomatic channels and will respond appropriately.

The ministry says the move could “throw cold water on efforts toward future-oriented development” in bilateral relations.

The “comfort women” issue remains a strain in relations between S. Korea and Japan.

The two countries had reached an agreement to settle the issue in 2015, under which Japan apologized and contributed one billion yen to a fund to help victims.

S. Korean President Moon Jae-in commissioned an independent panel to investigate the details surrounding the 2015 deal, which was forged by the previous Park Geun-hye administration.

The panel concluded last year that the agreement failed to meet victims’ needs.

Experts estimate up to 200,000 women, mainly from Korea and China were forced to sexual slavery by the Japanese army in the early- to mid-20th century.

Fewer than three dozen known surviving victims are thought to be alive in S. Korea. (CGTN)

Japan reveals name of new imperial era will be ‘Reiwa’

April 1, 2019 byRandev No Comments
Japan has announced that the name of its new imperial era, set to begin on 1 May, will be "Reiwa" - signifying order and harmony.