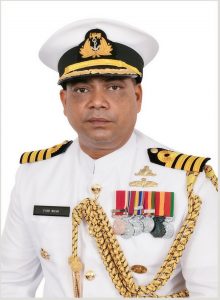 A product of Dharmasoka College in Ambalangoda, Capt. De Silva successfully completed the Naval Command and Staff Course at the US Naval War College in Rhode Island. Also a specialist navigator, he earned his recognition on special navigation from India and advanced navigation from China.
Capt. De Silva joined the Sri Lanka Navy in 1996 as an officer cadet of the 25th intake.

He received his commission in 1998 as an officer of the executive branch. He served in the Navy for nearly 24 years, undertaking various appointments at various capacities, such as the Director of Operations at Sri Lanka Coast Guard, and serving as the Commanding Officer and Executive Officer on board several naval ships as well as at shore establishments.

He was awarded the Rana Wickrama Padakkama (RWP) twice in recognition of his acts of gallantry on board fast attack crafts, fast gunboats, and offshore patrol vessels.

May 20, 2021 byMihi Perera No Comments
Sri Lanka’s Ambassador to the USA Ravinatha Aryasinha yesterday (19) called on Overseas Sri Lankans (OSLs) and Friends of Sri Lanka in the US to contribute relief goods and make donations due to the u

September 30, 2022 byNews Admin No Comments
A Gazette Extraordinary has been published specifying the regulations pertaining to the Colombo Port City Economic Commission.
The regulations, issued by President Ranil Wickremesinghe in his capacity