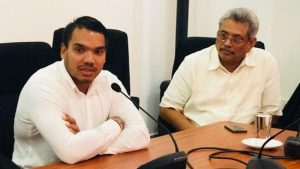 Tackling bribery and corruption in sports will be a key feature in the new Sports Act, The Morning learnt.

Newly appointed Minister of Sports and Youth Affairs Namal Rajapaksa said that the new Act has to be modern.

“Provisions on anti-corruption and bribery will be heavily featured in the new Sports Act,” he noted.

Further, he said the National Sports Council will be appointing a committee to look into the formulation of the Act.

“The committee will be appointed by the Sports Council and we will also be discussing it over with the Minister of Justice,” he said, adding that public opinion too would be sought.

“There will be a phase where public views will be gathered on what can be included in the Act.”

July 25, 2021 byNews Admin No Comments
The Department of Meteorology yesterday (25) warned that due to active south-west monsoon conditions over Sri Lanka, fairly strong winds up to 40-50 kmph and gusting up to 60 kmph can be expected in t

August 1, 2021 byNews Admin No Comments
Sri Lanka is still consuming only around 20-30% of the total oxygen (O2) production meant to meet all medical necessities of the country at present, despite claims being made of an increase in the tot