November 11, 2021 by Venessa Anthony No Comments

The World Health Organisation’s (WHO) recently released global air quality guidelines (AQGs) provided clear evidence of the damage air pollution inflicts on human health, at even lower concentrations than previously understood. The guidelines recommend new air quality levels to protect the health of populations by reducing levels of key air pollutants, some of which also contribute to climate change. 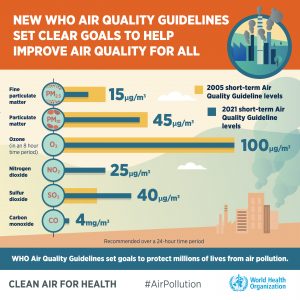 Since WHO’s last global update in 2005, there has been a marked increase of evidence that shows how air pollution affects different aspects of health. For that reason, and after a systematic review of the accumulated evidence, WHO has adjusted almost all the AQG levels downwards, warning that exceeding the new AGQ levels is associated with significant risks to health. At the same time, adhering to them could save millions of lives.

WHO’s new guidelines have recommended air quality levels for six pollutants of which evidence has advanced the most on health effects from exposure. When action is taken on these so-called classical pollutants – particulate matter (PM), ozone (O3), nitrogen dioxide (NO2), sulfur dioxide (SO2), and carbon monoxide (CO) – it also has an impact on other damaging pollutants.

According to WHO, the health risks associated with particulate matter equal or smaller than 10 and 2.5 microns (µm) in diameter (PM10 and PM2.5, respectively) are of particular relevance to public health. Both PM10 and PM2.5 are capable of penetrating deep into the lungs, but PM2.5 can even enter the bloodstream, primarily affecting the cardiovascular and respiratory systems as well as other organs. PM is primarily generated by fuel combustion in different sectors including transport, energy, households, industry, and agriculture. In 2013, outdoor air pollution and PM were classified as carcinogenic by WHO’s International Agency for Research on Cancer (IARC).

The guidelines also highlighted good practices for the management of certain types of PM (for example, black carbon/elemental carbon, ultrafine particles, particles originating from sand and dust storms) for which there is currently insufficient quantitative evidence to set AQG levels. They are applicable to both outdoor and indoor environments globally, and cover all settings.

Air pollution in Sri Lanka is a concern that is rarely highlighted but has a huge impact on public health. The quality of air in Sri Lanka is regularly affected by both internal and external sources.

“While internal sources like vehicle emissions, burning of solid waste and biomass, and fossil fuel-powered power plants, along with other industrial and agricultural activities, contribute massively to outdoor air pollution of the island, the trans-boundary emissions from other countries in the region contribute as external sources,” Gunathilaka explained.

WHO considers air quality in Sri Lanka to be “moderately unsafe”, as PM pollution has consistently exceeded their guidelines. While studies conducted to investigate health effects of air pollution in Sri Lanka are limited, it has been identified as a cause of various health issues ranging from respiratory symptoms, low birth weight, and lung cancers.

Gunathilaka also stated that reducing air pollution from energy, transportation, industrial, waste burning, and other activities needs to be done by increasing and improving alternatives like switching to renewable energy, improving public transport, and introducing sustainable waste management systems. These transitions won’t be easy, but with the decline of air quality in the country, we can’t delay them any longer.

“Even though the Nationally Determined Contributions (NDC’s) Sri Lanka submitted to COP26 (2021 United Nations [UN] Climate Change Conference) includes several targets to reduce emissions, some of the decisions that have been taken in the recent past makes it difficult to have faith in us achieving these goals. Even if our target is to achieve carbon neutrality in electricity generation by 2050, the agreement signed with New Fortress Energy last September includes a plan to develop a new liquid natural gas (LNG) terminal which will contribute to more carbon emissions,” she explained.

“Similarly, under the transportation sector, while Sri Lanka is aiming to strengthen the public transport sector, the cancellation of the Colombo Light Rail project last year makes us question whether the country is taking the necessary steps to reduce air pollution fast enough,” Gunathilaka added.

“Even though burning plastic is an offence in Sri Lanka, many people still continue to burn solid waste including tires. So, within our households and communities, we can help improve Sri Lanka’ air quality by reducing waste, not burning solid waste and biomass, and educating each other. So next time your neighbour is burning waste, try and educate them. Climate crisis is already here and we are running out of time. If we are to prevent our air quality from further declining, we must act now,” Gunathilaka insisted.

She also informed us that every year, exposure to air pollution is estimated to cause seven million premature deaths and result in the loss of millions more healthy years of life. In children, this could include reduced lung growth and function, respiratory infections, and aggravated asthma. In adults, ischaemic heart disease and stroke are the most common causes of premature death that can be attributed to outdoor air pollution, and evidence is also emerging of other effects such as diabetes and neurodegenerative conditions. This puts the burden of diseases attributable to air pollution on a par with other major global health risks such as unhealthy diet and tobacco smoking.

“Air pollution is one of the biggest environmental threats to human health alongside climate change. Improving air quality can enhance climate change mitigation efforts, while reducing emissions will in turn improve air quality,” Gunathilaka stated, adding that by striving to achieve these guideline levels, countries will be both protecting health as well as mitigating global climate change.

Speaking to an official at the Central Environment Authority (CEA), we were told that the six air pollutants in Sri Lanka are monitored regularly. “The Air Quality Index (AQI) is disseminated for the public on a daily basis to keep them aware of the air quality and connected health concerns of the concerned areas,” the official commented.

The monitoring facility of meteorological parameters such as wind speed and wind direction, relative humidity (RH), and temperature were also integrated with the monitoring stations as meteorological data are essential for data analysis and interpretation of results.

The official also informed us that the monitoring is being carried out with the aid of the Department of Motor Traffic to ensure the uniformity, consistency of air quality data, and obtaining technical and financial support for operating the monitoring stations. “Ambient air quality monitoring at Colombo Fort is carried out and it is basically for determination of PM10 using high volume sampling, and NO2 and SO2 levels using the wet chemical method,” the official added, speaking on the topic of what is being done to monitor air pollution.

According to data presented on IQAir, Sri Lanka presented a “Moderate” figure for air cleanliness in 2019, with a US AQI figure of 78. The average annual concentration of the pollutant PM2.5 was 25.2 µg/m³. We questioned the CEA official on what is being done to eradicate the issue, to which we were told that the situation is being taken care of, and the problem is being worked on, adding that the new guidelines issued by WHO will be taken into account and air pollution will be an issue that is taken seriously in the country.

The fear of getting tested for Covid

August 1, 2021 byNews Admin No Comments
We have lived with Covid-19 for some time now and words like facemasks, vaccination, and new variants have become commonplace. However, with the evolution of the virus and the relatively haphazard vac

Not your ordinary travel blog

August 13, 2021 byNews Admin No Comments
We’ve all heard of and seen Instagram travel influencers, but little known is the travel influencer community of Facebook. Although Instagram focuses mostly on an aesthetic looking grid, and photos th