NFF MPs not in parliament to defend his leader on Friday

September 24, 2018 by themorninglk No Comments 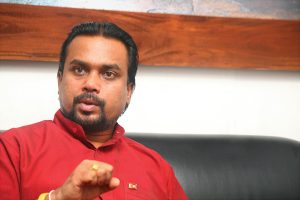 Accordingly, the parliament had passed the two motions brought to suspend NFF Leader Weerawansa from Parliament for two weeks and MP Prasanna Ranaweera for four weeks for violating the code of conduct of parliamentarians.

Ranaweera was accused of trying to grab the mace while Weerawansa was alleged to have used abusive language.

However, UPFA MP Udaya Gammanpila told The Sunday Morning that the Friday’s attendance sheet should be checked to tell exactly whether that NFF MPs were in parliament or not.

“Usually, after the first hour, majority of MP s are not sitting in parliament as they are going for different committees. The motions came in an unexpected time without a prior notice,” Gammanpila said. (MM)

August 7, 2021 byNews Admin No Comments
A dinner that was organised last Thursday (5) by Energy Minister Udaya Gammanpila for the governing Sri Lanka Podujana Peramuna (SLPP) parliamentary group had to be cancelled after Gammanpila was plac