Nihal Fonseka and Dr. Dushni Weerakoon resign from Monetary Board 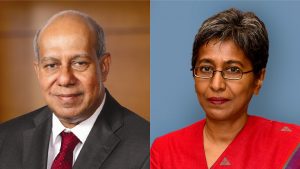 The letters of resignation were submitted to President Gotabaya Rajapaksa a few days ago and today (31 May) was their last day on the Board, informed sources told The Morning Business. The Monetary Board includes the Governor of the Central Bank, the Secretary to the Ministry of Finance (ex-officio), and three non-executive members.

The non-executive board members are nominated by the President before they are submitted for Constitutional Council approval and each appointment is for a six-year term. Nihal Fonseka was appointed in July 2016, and has resigned before the completion of four years, while Dr. Dushni Weerakoon was appointed as recently as July 2019, and has resigned within her first year.

The third non-executive Monetary Board member is Sanjeewa Jayawardena PC, who was appointed in February this year. He is expected to remain on the Board.

When contacted, Fonseka confirmed that he had submitted his resignation effective yesterday.

However, Dr. Weerakoon refused to comment when contacted and requested us to direct our queries to the Central Bank.

Upon contacting Central Bank Governor Prof. W.D. Lakshman, he confirmed that both Fonseka and Dr. Weerakoon had submitted their resignation, adding that no replacements had been finalised for the two vacancies.

However, our sources informed us that the replacements are likely to be Econsult Asia Managing Director Dr. Kenneth De Zilwa and senior economist Prof. S.S. Colombage. When we contacted De Zilwa he said he had not been approached.

“There is a rumour that I am being appointed but I have not been told anything so far. Not even informally,” he said.

These resignations come hot on the heels of the Central Bank’s decision to reconstitute the MPCC, as reported exclusively by The Sunday Morning Business yesterday.

Reliable sources told us that only two members of the previous committee, which was in place from 2015 to 2019, have been retained in the new MPCC. They are University of Colombo Professor of Economics Sirimal Abeyratne, who has retained Chairmanship of the MPCC, and Lakshman Kadirgamar Institute of International Relations and Strategic Studies Global Economy Programme Chair Dr. Ganeshan Wignaraja.

Speaking to The Morning Business several economists expressed concern about the resignation of Fonseka and Weerakoon, as these are fixed term appointments which are not expected to change with the change of governments.

“What is happening to the independence of the Central Bank? The Monetary Board is not supposed to be reconstituted by each and every government that comes into power,” one economist said.

“There appears to be a stifling of divergent views within the Central Bank. There is a sameness setting in,” another economist opined.

Nihal Fonseka is a banker by profession and has held several key positions in the local and international banking sectors. He was the Chief Executive Officer of the DFCC Bank for over 13 years and prior to that was the Deputy Chief Executive Officer of HSBC Sri Lanka for 10 years. He has also served as the Chairman of the CSE and the Association of Development Financing Institutions in Asia and Pacific, Manila, and also as a Director of Commercial Bank of Ceylon PLC and DFCC Vardhana Bank PLC.

Dr. Dushni Weerakoon is the Executive Director of the Institute of Policy Studies of Sri Lanka (IPS) and Head of its Macroeconomic Policy Research. She has extensive experience in public policy engagement and has served on the Trade and Productivity Commission, Ministry of Development Strategies and International Trade (2019); Committee of Experts to Formulate the National Sustainable Development Vision of Sri Lanka: 2030, Presidential Secretariat (2017-18); Committee on Trade Policy Formulation, Ministry of Development Strategies and International Trade (2016); Trade and Tariff Committee, Ministry of Finance (2004-10); Committee of Experts to negotiate the South Asian Free Trade Agreement, Ministry of Trade and Commerce (2004-05); and Macro and Trade Policy Steering Committee, Ministry of Policy Development and Implementation (2002-04).

She has worked as a consultant for international organisations such as the Asian Development Bank (ADB), World Bank, the United Nations Economic and Social Commission for Asia and the Pacific (UN-ESCAP), United Nations Development Programme (UNDP), and the International Labour Organisation (ILO), and served as a resource person on the Asia-Pacific Regional Trade Policy Course conducted by the World Trade Organisation (WTO) and University of Hong Kong (2003-06). She has experience as a director on the boards of corporate and academic entities, including as an Independent Non-Executive Director at Nations Trust Bank (2007-2016) and Cargills Bank (2018-2019) and as a Director at the Centre for Poverty Analysis (2008-2014), the Gamani Corea Foundation (2018-present), and the Social Policy Analysis and Research Centre (SPARC) of the University of Colombo (2018-present).

October 18, 2020 byCharindra No Comments
The pandemic has heavily resulted in women in both the formal and informal sectors losing their jobs - because women are some of the first to be impacted in the tourism industry.