Nineteen years on, revisiting the mystery… Was Hansie Cronje murdered? 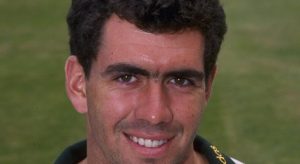 Cronje at least confessed, but how about others?

Though often considered a disgraced sportsman due to his involvement in match-fixing, Cronje could have been a rare cricketer who actually confessed into his act of dishonesty and openly lamented on his wrongdoing whereas many other world famous players may be still basking in glory and undue reputation after having committed crimes thousand times bigger than what the deceased former South Africa Captain had done.

The death of Hansie Cronje, South Africa’s disgraced former Captain who was killed in a plane crash in the Western Cape in June 2002, may have been no accident, according to a report in the latest edition of Observer Sport Monthly.

The report alleges that Cronje, who had been banned for life from cricket for his part in the match-fixing scandal, may have been murdered to ensure that the full extent of the corruption never reached the light of day.

Cronje, who had been forging a new career as a businessman, was killed along with two pilots when his chartered plane crashed in mountains near his estate in George, a small town on South Africa’s Garden Route.

It later transpired that Cronje had missed an earlier flight and had arranged a lift in a cargo plane, but at the time no suspicious circumstances were reported. Given that Cronje was a devout Christian, it struck many as being the ultimate act of divine retribution.

A lot of unknowns

But Gavin Branson, the chief executive of AirQuarius, the owners of the crashed plane, is one of many people who remains troubled by the circumstances. “There are a lot of unknowns about what happened,” Branson is reported as saying.

“I think it will be a long time before the (Civil Aviation Authority) report comes out. I have a million questions that I haven’t even started asking yet. We’d been flying that route daily and in far worse weather without experiencing even a hint of trouble.”

The investigation is destined to take a long time, especially as there are unconfirmed rumours that the ground landing system at George Airport had been tampered with.

“I understand that police have found evidence of sabotage,” one investigator is reported as saying. “But they’re reluctant to go public on this. The full cost of a follow-up investigation would be too great in a country that is already driven by crime. It suits the police to have a closed case.”

“A lot of people wanted Cronje dead,” adds the source. “They feared that he would one day tell the full truth, and then many more would be implicated. I know people who have looked closely into what happened but who were warned off by threatening phone calls. They’re scared of getting a bullet in the head.”

Cronje, who first stood in as South Africa’s Captain at the age of 24, finished his career with a record of 27 victories in 53 Tests, making him South Africa’s most successful Captain in Test history. He scored 3,714 runs at an average of 36.4, including six centuries, and to this day remains revered by many of his former team-mates, despite his spectacular fall from grace.

At the King Commission in 2000-01, which investigated the extent to which match-fixing had permeated the game, Cronje confessed to what he called “an unfortunate love of money”.

He claimed to have accepted at least $ 130,000 (Rs. 25.7 million in today’s value) from illegal bookmakers, although recent revelations suggest that he possessed as many as 72 bank accounts in the Cayman Islands. His death, one way or another, has ensured that the full story may never be told.

“It is the court’s view that the death of the deceased Wessel Johannes (Hansie) Cronje was brought about by an act or omission prima facie amounting to an offence on the part of pilots,” Judge Desai said.

THE CIRCUMSTANCES OF THE ACCIDENT

Here are the circumstances and probable cause as reported by the Bureau of Aircraft Accident Archives (BAAA or B3A), established in Geneva in 1990 for the purpose to deal with information related to aviation accidentology. 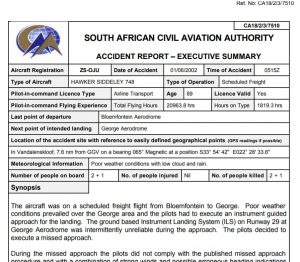 The aircraft was on a scheduled freight flight from Bloemfontein to George. Poor weather conditions prevailed over the George area and the pilots had to execute an instrument guided approach for the landing. The ground based Instrument Landing System (ILS) on Runway 29 at George Aerodrome was intermittently unreliable during the approach. The pilots decided to execute a missed approach. During the missed approach the pilots did not comply with the published missed approach procedure and with a combination of strong winds and possible erroneous heading indications they lost situational awareness. They flew the aircraft into a valley and crashed into the side of the mountains North-East of the George Aerodrome. The passenger was Hansie Cronje, a former South African cricket captain who had missed a South African Airlines flight.

The crew deviated from the prescribed missed approach procedure during an attempted Instrument Landing System landing on Runway 29 at George in Instrument Meteorological Conditions and lost situational awareness aggravated by the presence of strong upper SouthWesterly winds. They allowed the aircraft to drift off course resulting in a controlled impact with terrain 6.7 nm North-East of the aerodrome. Contributing factors to the probable cause were the weather conditions, the intermittent unreliability of the Instrument Landing System, the serviceability of the directional gyro and the uncleared defects.

The crash site: All three on board had died instantly when the light plane crashed into a mountain near George in South Africa’s Western Cape province during bad weather

The air crash that killed former South African cricket Captain Hansie Cronje in June 2002 was the result of pilot error, an inquest has found, reported BBC on 14 August 2006.

Cronje’s career ended when he admitted to involvement in match fixing in 2000.

The pilot and co-pilot also died when the light plane crashed into a mountain near George in South Africa’s Western Cape province during bad weather.

Judge Siraj Desai said the air crew had not followed procedures on their second attempt to land at George airport.

“The complacency of the pilot in command was surprising and … the co-pilot failed under the circumstances to do what a reasonable pilot would have done,” the Cape High Court judge said at the conclusion of the inquest on Monday.

“It is the court’s view that the death of the deceased Wessel Johannes (Hansie) Cronje was brought about by an act or omission prima facie amounting to an offence on the part of pilots,” Judge Desai said.

During the inquest it emerged that the pilots Willie Meyer and Ian Noakes – apparently believing they were flying over the sea – had ignored 13 ground proximity warnings given by navigation equipment on the Hawker Siddeley light aircraft.

Cronje’s involvement in match fixing first became known after Indian police intercepted a telephone conversation between the then South African captain and a local bookmaker during a tour of India in 2002.

During a subsequent inquiry in South Africa he admitted receiving $140,000 (Rs. 27.7 million in today’s value) from bookmakers, but still said he was not guilty of match fixing.

Later that year the United Cricket Board of South Africa banned him for life from the game.

Criminal charges against him were still being investigated in India at the time of his death.

The final moments inside doomed plane

Transcripts from the cockpit voice recorder 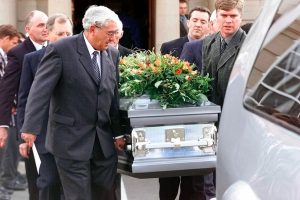 More than a thousand mourners filled the Grey College Chapel for Cronje’s funeral, while a thousand more outside watched the service, which was televised nationally, on large screens. Divisions of ideas on Cronje’s demise were forgotten as South Africa, a nation rebuilding on forgiveness and reconciliation, mourned as a whole. South Africa opening batsman under Cronje, Gary Kirsten said: “A great cricketer, a great performer, and a great on-field leader of his country”. Here is Cronje’s father Ewie (left) at Cronje’s funeral

Cronje died along with two pilots in a Hawker Siddeley 748 aircraft which crashed into the mist-covered Outeniqua mountains near George at 7.20 a.m. on 1 June, 2002.

Now, according to Rapport newspaper, copies and transcripts from the cockpit voice recorder recovered from the doomed cargo aircraft form part of an extensive report prepared by the Civil Aviation Authority (CAA) for an inquest due to begin in Cape Town.

The CAA report attempts to determine what caused the fatal accident which also claimed the lives of senior captain Willie Meyer and his co-pilot Ian Noakes, while the inquest will determine whether anyone can be held responsible and prosecuted for their deaths.

The flight was a routine postal run from Bloemfontein to George, which Cronje had used on previous occasions to fly home to his golfing estate home.

While the voice recordings only reflect the conversation between the two pilots, Cronje, who was strapped into one of the two seats directly behind them, must have realised something was seriously wrong.

For 69-year-old Meyer, with close on 21,000 hours flying time, it was just another routine flight to George. His 50-year-old British co-pilot Noakes was less experienced with 1,099 hours in logbook. It was Noakes who was at the controls when the flight took off from Bloemfontein.

According to Rapport, from the recording it appears that both pilots were in good spirits until about 30 minutes before the crash. At 6.55 a.m. the aircraft was still on track to land. The newspaper said Meyer is clearly heard telling Noakes at that state, “I know the mountains are now well behind us”.

But minutes later there were problems. Because of the adverse weather the pilots had to make use of the instrument landing system (ILS) to make a safe landing at George airport. But the ILS on runway 29 was not working and there was no air traffic controller on duty, the newspaper reported.

According to the CAA report, the pilots, despite not getting confirmation that they could not use the ILS, acted in contravention of instructions by still depending on it anyway. At 7.06 a.m. Meyer said: “I see a little ground, but it’s not all that wonderful”.

Seconds later Noakes spotted a warning on the instrument panel that the ILS was out of order, but they continued their descent. Rapport’s article shows the confusion between the two pilots over several minutes as they try and work out what is happening.

As they spoke, a strong wind had pushed the aircraft northwards in the direction of the Outeniqua mountains. The report suggests that neither pilot was aware of this because the aircraft’s navigational instruments were not functioning properly.

Caught up in thick cloud, the aircraft headed straight for the mountains. In the final minutes, Meyer had taken over the controls from Noakes and Noakes shouted “pull up”. This is followed by more shouts of “pull up … pull up” followed by silence.

When rescuers found the aircraft, Cronje was still strapped into his seat. Noakes’ body was trapped in the cockpit and Meyer’s was found outside the wreck.