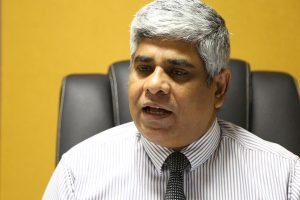 The Chief Executive Officer (CEO) and Chief Financial Officer (CFO) of the National Insurance Trust Fund (NITF) have been interdicted for acting without due care and in negligence of their fiduciary roles, The Sunday Morning Business learns.

The decision has been taken by the Insurance Regulatory Commission of Sri Lanka (IRCSL) with effect from 16 December 2019. A letter to this effect, seen by The Sunday Morning Business, has been issued by the IRCSL to the CEO of the NITF.

This action has been taken based on the results of a special audit carried out by the internationally reputed audit firm Ernst & Young Global Ltd. (EY) on behalf of the IRCSL, which was completed on 25 September 2019.

The audit identified seven critical issues and concluded that the affairs of NITF are being conducted in a manner that is detrimental to both NITF and the national interest and prejudicial to the interest of policyholders.

NITF is a statutory body that offers Agrahara insurance, a health insurance for retired public sector workers. It is also the only company which offers reinsurance in the country.

The seven critical issues listed in the report are as follows:
1. Sustainability of National Natural Disaster Insurance Scheme (NNDIS) segment

2. NNDIS policy issued to the Government of Sri Lanka vs. reinsurance arrangement

5. Recovery of reinsurance receivable in NNDIS 2016 segment for 2016 flood event

7. Delay in entering into reinsurance arrangement for NNDIS

Based on these critical issues listed by the EY, the IRCSL decided to remove the CEO and CFO of NITF from their respective positions and appoint suitable persons with immediate effect. The insurance industry regulator also issued warnings to the board members of NITF who had participated in the 151st and 153rd board meetings as indicated by EY, as no corrective action has been taken against those involved to prevent further occurrence.

The decisions also restrict staff of the NITF involved in the procurement of NNDIS 2016/2017 from sitting in any of the NITF’s bid opening, Technical Evaluation Committee (TEC), and procurement committees in view of the findings of EY on NNDIS procurement 2016/2017.

The IRCSL has also decided to direct the NITF to replace the NITF Internal Auditor, since no material observation relating to several critical issues has come out of the Audit Committee.

When contacted, interdicted NITF CEO Sanath C. De Silva preferred to not speak to the media on this issue due to ongoing legal procedures, simply saying his suspension is “unfair”. De Silva was appointed as the NITF CEO in 2015.

In April last year, the IRCSL launched a forensic audit to probe into serious violations of its mandatory provisions. EY launched investigations under Section 54 of the Regulation of Insurance Industry Act No. 43 of 2000 and the audit was carried out for a period of five months.

In a letter addressed to the CEO of the NITF on 27 March 2018, the IRCSL listed three factors which led to this investigation. The accuracy and reliability of financial statements submitted to the IRCSL for the periods ended 30 September 2017 and 30 November 2017, including segmental reporting in addition to the quarterly returns submitted by the NITF for the third quarter of 2017, was mentioned as the foremost reason.

The second issue cited was the accuracy of recordkeeping with respect to claims and the responsibility of provisioning. The final issue was the timely collection of reinsurance receivables and the maintenance of up-to-date information with regard to the same matter.

The IRCSL has been established to safeguard the industry and policyholders through supervisory control of insurance companies.

Pandora Papers report delayed without cause

June 26, 2022 byNews Admin No Comments
The handing over of the report by the Commission to Investigate Allegations of Bribery or Corruption (CIABOC) regarding the allegations against Nirupama Rajapaksa and her husband Thirukumar Nadesan, w

‘Sri Lanka is not bankrupt’

April 30, 2022 byNews Admin No Comments
Despite negative comments on Sri Lanka being bankrupt due to being unable to meet its foreign debt obligations with very little reserves remaining, Board of Investment (BOI) Chairman Raja Edirisuriya