With the recent hike in fuel prices, burning issues on the cost of living continue to arise among the public. The cost of living cabinet subcommittee, headed by the President, had decided to increase fuel prices after considering the existing loans which were taken by the Ceylon Petroleum Corporation (CPC), amounting to $ 3 billion.

In an interview with The Sunday Morning, Minister of Energy Udaya Gammanpila said that so far, there is no decision to decrease fuel prices.

Following are the excerpts from the interview: 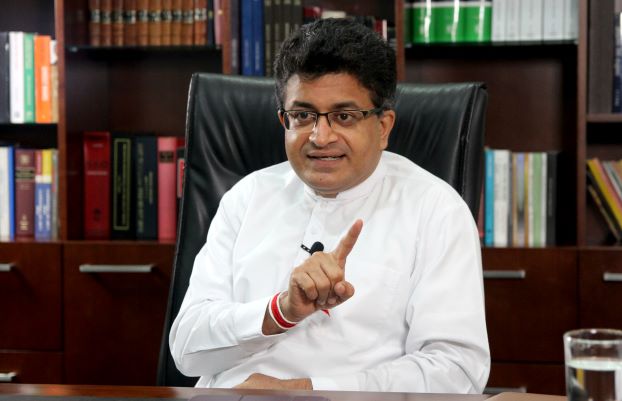 “The fuel price hike was made by the cost of living cabinet subcommittee headed by the President with the participation of the Prime Minister and three other ministers. That committee has not deliberated on reducing the prices again immediately. The reason is, we increased the prices after reflecting on the issue of loans taken by the CPC” Minister of Energy Udaya Gammanpila

Oil prices are increasing rapidly; every single day, prices are going up. Actually, oil-distributing institutes in Sri Lanka are also incurring losses due to the recent price hikes in the global market.

When the price of crude oil in the world market was less than $ 40 in 2020, the concession was not given, so that when global prices went up, domestic prices would not be increased. What happened to that decision?

Last year was a terrible year for the entire world. In Sri Lanka, we lost our revenue from tourism, direct foreign investments, and the high revenues earned from duties and taxes from imported vehicles. At this time, the Government had very few income-generating sources.

Continuous development of the pandemic had created new expenditures for the Government such as maintaining quarantine centres, conducting PCR tests, vaccination, purchasing PCR machines, PPE (personal protective equipment), etc. Up to now, the Government has spent nearly Rs. 300 billion for Covid-19-related activities. Though the government expenditure has remarkably increased, income has drastically declined. Consequently, the income earned by imposing taxes on petroleum products is being used for these expenditures.

What’s the profit made by the CPC during last year due to the fall in crude oil prices?

Honestly, the CPC did not make profits since the oil prices fell in the world market last year. That was absorbed by the Treasury by way of taxes. The CPC produces around 20-25% of the petroleum products locally. However, because of the sharp drop in the demand, that production became around 40% of the annual demand. We don’t have to pay the taxes that we pay for imported petroleum products, when we refine the same at our local refineries. Thus, the CPC was able to record a profit of Rs. 2.1 billion for the entire year of 2020. However, the CPC has now recorded a Rs. 57 billion loss for the first half of 2021.

Lanka Indian Oil Company (LIOC) has also increased fuel prices along with the CPC whenever there have been increases. How does LIOC record profits while the CPC is struggling with financial burdens?

There are four reasons. Firstly, the CPC accounts for 90% of the auto-fuel market, mainly petrol and diesel. Accordingly, the CPC’s loss is huge compared with the LIOC losses since they have a small market share. On the other hand, the CPC is incurring losses heavily on furnace oil and kerosene while the LIOC is not selling those two commodities. Presently, a litre of kerosene oil costs Rs. 102 in the world market but we are selling it at Rs. 77 in the local market.

Secondly, we supply furnace oil to the Ceylon Electricity Board (CEB) for electricity production; at the same time, we have to ensure that the CEB has to generate electricity for poor people at an affordable price. So, we supply furnace oil at a subsidised rate for the CEB. Our local production cost is Rs. 90 per litre of furnace oil and when we import, we have to pay Rs. 105 per litre. However, we are selling it to the CEB at Rs. 70. The LIOC has not subsidised any product to the CEB, the fishing community, or the farming community.

Thirdly, the LIOC is receiving profits mainly from bunker fuel, bitumen-based fuel, and lubricants. The CPC’s market share in those products is very insignificant.

The fourth reason is when the CPC sold petrol and diesel at discounted prices in the past years, the LIOC increased their prices and had a premium over the CPC’s prices; thus, by selling auto-fuel at a discounted cost, we had to obtain vast amounts of loans from the state banks. The total loans amount to nearly $ 3 billion and there is no such debt burden for the LIOC.

What’s the development progress of the Muthurajawela and Kolonnawa terminals to improve the storage capacity of fuel?

Nine oil tanks are under construction and the construction process would be completed within the next two years. Accordingly, our capacity will be increased by another 87,500 metric tonnes. Though we increased our storage capacity, there is an issue with the funds to purchase petroleum products. Even right now, we don’t have the funds to purchase those products. That’s why we purchase on credit for 69 months. Therefore, even if we have a large storage capacity, we will not be able to purchase oil at a lower market rate and keep them in-store.

What measures have the Government put in place to address the rising cost of living, especially for the segments worst affected by Covid-19 and adverse weather?

After 21 months, the decision to increase the prices of petroleum products was taken to control the cost of living. Since there is a huge demand for petroleum products, we have to spend around $ 300 million every month to import those products. At the end of 2014, the dollar was sold at Rs. 131; but now it is more than Rs. 200. When there is a huge demand for the US dollar, the dollar will appreciate and as a result, there will be a price hike in all imported commodities. We increased the prices of petroleum products to manage the demand.

There were some statements made about discussions to reduce fuel prices. Is there any such move?

The fuel price hike was made by the cost of living cabinet subcommittee headed by the President with the participation of the Prime Minister and three other ministers. That committee has not deliberated on reducing the prices again immediately. The reason is, we increased the prices after reflecting on the issue of loans taken by the CPC. We had not covered that particular cost in full, we had not increased the price of kerosene oil considering the impact on the fishing and farming communities. We have already considered the impact on the low-income families when we revised the prices but there is no immediate decision to reduce the fuel prices.

According to a statement released by the President’s Office, the increase in fuel prices is only one key factor in a common strategy that strengthens the local economy. How will the current price increase of fuel support the local economy?

The Central Bank advisory note dated 30 May 2021 mentioned that Sri Lanka has very limited foreign currency reserves, which would suffice to get imports only for three months. Due to that reason, unless we manage and control the demand for petroleum products, which is under import commodities, we will not be able to import raw material and intermediate commodities as well as capital goods required for our local economy. By discouraging the use of fuel, we are trying to save our limited foreign currency reserves to import the essential products for our local economy.

The recent fuel price hike has brought to the surface a split in the Sri Lanka Podujana Peramuna (SLPP), especially with coalition partners. Do you think that the governing alliance could withstand the growing cold war between alliance partners?

Top sources at the Ministry of Energy told us that the Fuel Price Stabilisation Fund (FPSF), which had accumulated between Rs. 18-20 billion is currently empty, and the objectives of setting up the fund could not be achieved. You had also submitted a cabinet paper to re-establish the fund. What is the present status of this fund?

Initially, I denied the reports that the sources from the Ministry of Energy said that the fund was empty. No officer at the Ministry has the knowledge to claim whether it is empty or full, because the fund is not with our Ministry, it’s with the Finance Ministry.

The fund was established on 30 March 2020 by the Ministry of Finance. Though it was named the Fuel Price Stabilisation Fund (FPSF), in reality, it was not so. There was no such fund in action until now. Thus, on 15 March 2021, I submitted a cabinet paper to establish a real Fuel Price Stabilisation Fund after studying 28 such funds available globally. The cabinet paper is yet to be approved since such a fund could not be established in a rising fuel market.

Is there any new mechanism in place to reduce the losses incurred by the CPC and the Ceylon Petroleum Storage Terminals Ltd. (CPSTL)?

I must say, the CPSTL does not have any losses and it has been continuously recording profits. However, for the CPC, we have taken short-term, mid-term, and long-term measures to ensure that it would not make losses in the future.

Firstly, we have taken steps to convert dollar loans to rupee loans to safeguard the CPC against the risk of dollar appreciation. As the second step, we have obtained cabinet approval to restructure the existing dollar loans, to replace those with low interest-bearing loans.

As mid-term measures, we have decided to establish a new oil refinery with the capacity of 100,000 barrels per day and also to upgrade the existing refinery. With that, we would be able to save $ 300-350 million annually. Along with upgrading the refinery and establishing a new refinery, we would upgrade the existing pipeline and establish a new pipeline. Further, we are negotiating with the Indian Government to use the Trincomalee Oil Tank Farm for the benefit of Sri Lanka.

As a long-term solution, initial steps for exploring and excavating our oil and gas resources hidden in the deep sea have been commenced. We have already introduced a new legal framework for this purpose and also, we have established a new institute called the Petroleum Resources Development Secretariat to look after the exploration and production of petroleum resources.

The Cabinet has approved the drafting of a new bill to regulate the oil and gas industry. What is the current progress?

After cabinet approval, the country came under a lockdown, so there is no notable progress on that new bill.

June 12, 2021 byNews Admin No Comments
Investigations are underway, according to the Marine Environment Protection Authority (MEPA), to determine as to what may have caused the film of some substance, which appears to be an oil slick, pres

Hydropower hit by drought: CEB to extend PPAs with PPCs

March 7, 2021 byNews Admin No Comments
The Ceylon Electricity Board (CEB) will extend the existing power purchasing agreements (PPA) with private power companies (PPC) which are set to expire in April, in order to manage the existing deman