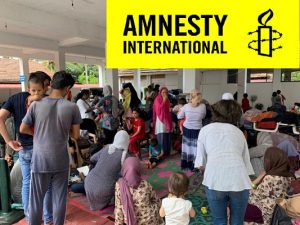 Amnesty International and Minority Rights Group International today claimed that no justice was done for refugees and asylum-seekers who faced threats and violence following the Easter Sunday attacks.

Amnesty international releasing a statement today said that there has been
no police investigations nor accountability has been taken for  threats and
violence faced by these refugees six months following the Easter Sunday bombings.

“In the days after the Easter Sunday massacre, armed mobs mounted reprisal attacks on refugees and asylum- seekers from Pakistan, Afghanistan and Iran. Even after they sought shelter in nearby community centres and a police station, the mobs attacked them, hurling stones in one case,”Amnesty said.

The two humanitarian bodies launched a report titled ‘Unsafe at home – Unsafe Abroad’ which reports on the crisis faced by refugees after the Easter Bombings.

“The refugees and asylum-seekers in Sri Lanka who came under attack have had a trauma visited upon them twice. They were first forced to leave their own countries, and now, in the country where they sought safety and
shelter, they have had to leave their homes once again. They languish in limbo, still fearful for their safety and uncertain of what is to come,”  Amnesty International, South Asia Research Director, Dinushika Dissanayake said.

Dissanayake said the attacks against these refugees and asylum-seekers are yet to be investigated and no one has been held accountable.

Meanwhile, Minority Rights Group International, Executive Director said, Joshua Castellino said, “The Sri Lankan authorities must uphold their international obligations to protect their human rights and the international community should expedite their resettlement process for those who are eligible so that they can finally find safety and their ordeal can come to an end.”

The report quoted a Kashmiri from Pakistan-administered Kashmir as saying, “A mob of four or five men showed up at the home. They told us to leave. They hit us. Our landlord stopped the guys. He told them to let us go. They were shouting at us in Sinhalese, telling us to leave the country.”

Subsequently, Kashmiri and his friends fled to a nearby police station.

“Naila (not her real name), a Pakistani Ahmadi refugee, had found sanctuary in a community centre after being forced to leave her home with her family.”

“The Sri Lankan authorities must make clear that violence against ethnic and religious minorities, particularly refugees and asylum-seekers, will not be tolerated and that anyone suspected of criminal responsibility for attacks against them will be brought to justice in fair trials,” Dinushika Dissanayake said.

“Sri Lanka is at risk of damaging its reputation as a country that welcomes those fleeing persecution elsewhere. The authorities must take urgent steps to guarantee the safety, dignity and human rights of all refugees and asylum seekers, ensuring that they are safe and have humane living conditions,” Joshua Castellino said .

January 2, 2021 byLahiru Pothmulla No Comments
Samagi Jana Balawegaya (SJB) MP Imthiaz Bakeer Markar has tabled a private member’s bill in Parliament seeking to make it mandatory to allocate a quota of 25% for the youth when contesting in any upco

November 28, 2022 byNews Admin No Comments
The Incorporated Council of Legal Education (ICLE) has decided to grant relief to the students referred in the last examination to sit the preliminary year examination of the Sri Lanka Law College (SL