No major flood risk for Colombo

September 2, 2020 by Charindra No Comments 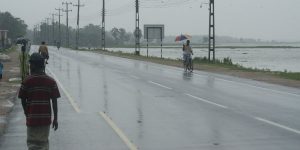 Colombo has reported only 50.3 mm of rainfall within the last 24 hours and is in no serious danger of flooding, the Department of Meteorology told The Morning.

This is because, compared to the highest rainfall of 100 mm reported in several outstation districts extending from Galle to Trincomalee via Hambanthota and Batticaloa, Colombo has had far less rainfall.

The Department of Meteorology stated that if the prevailing situation persists, flooding in Colombo will stem from suburbs close to the Kelani River. Additionally, the rainfall is expected to persist through tonight until tomorrow (3) morning.

January 9, 2021 byLahiru Pothmulla No Comments
Three Sri Lankan men have been charged in California with aiding the terrorist group blamed for 2019 Easter attacks that killed 268 people in Sri Lanka, including five US citizens, and injured hundred