No more trips to Singapore for arbitration 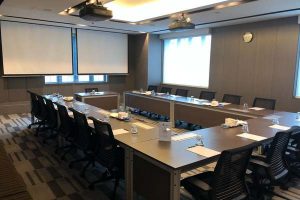 A room at the Singapore International Arbitration Centre

By Madhusha Thavapalakumar
—
Sri Lanka, which is heavily reliant on the Singapore International Arbitration Centre for its arbitration and dispute resolution needs, will soon be conducting these discussions at home in Colombo, The Sunday Morning Business learns.
This is because the long-underutilised Sri Lanka National Arbitration Centre (SLNAC) is set to undergo a complete revamp with the aim of making it a profit-making state institution for the Sri Lankan Government, according to the Ministry of Justice, Human Rights, and Legal Reforms.
Since its inception in 2015, the SLNAC has been almost inactive with little to no businesses coming into the country and failing to make any profit. As a result, the Sri Lankan Government has had to rely on the Singapore International Arbitration Centre to solve the issues that arise from Sri Lanka’s international agreements and from its bilateral relationships in general.
Speaking to The Sunday Morning Business, Ministry of Justice, Human Rights, and Legal Reforms Secretary J.J. Rathnasiri noted that solving issues at the Singapore International Arbitration Centre is extremely costly and sometimes, the Government has to also send local officials to the centre when solving issues.
“In such cases, we have to bear the costs of these officials too. Solving issues at the Singapore centre costs us a fortune. However, it is difficult to disclose an exact amount as it differs from dispute to dispute,” he added.
Considering this, the Ministry recently sought the approval of the Cabinet of Ministers to revive the SLNAC and to operate it as an independent institution. Further, the SLNAC will be formally incorporated into all international agreements Sri Lanka enters in future, including the Sri Lanka-Thailand FTA (free-trade agreement) and the Economic and Technology Co-operation Agreement (ETCA).
According to Rathnasiri, the second biggest reason for reviving the SLNAC is the Colombo Port City project.
“Sri Lanka should have its own international arbitration centre, especially to solve the issues that might arise from the Port City,” he added.
Rathnasiri noted that the Ministry would make changes to the existing five-member team and will also appoint President’s Counsel, and the centre will be managed in a manner where arbitration business would come to the SLNAC. After the revamping it is hoped that the SLNAC will be able to earn a minimum of Rs. 80,000 per day.
“We will be open to our private companies also. They can come to SLNAC and solve international disputes,” Rathnasiri added.
He stated that in revamping the SLNAC, the Ministry would follow international standards set for arbitration centres, and through that, earn profits from the SLNAC in the future.

An international arbitration centre is an institution that directs the arbitration arrangements of a country that arise from international agreements and relationships with other countries. The centre provides space for meetings and discussions between two parties where lawyers and negotiators from both sides are present.

Madu Ratnayake of Virtusa amongst Top 100 Leaders in Technology

July 1, 2019 bythemorninglk No Comments
Microsoft goes to great lengths to help local SMEs with access to funds, technology, and the technical know-how to expand their enterprises.

Do not assume COVID pandemic reaching ‘end game’, WHO warns