No private buses from 7 Nov 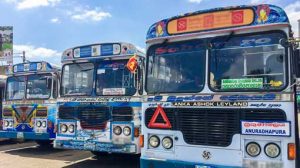 Speaking to The Morning, Lanka Private Bus Owners’ Association (LPBOA) President Gemunu Wijeratne said: “We are already running at half the capacity after the health authorities informed us that we are only allowed to transport people under strict health guidelines. The recent wave has proven that the virulence of the coronavirus has increased and that people who essentially do not sit in close proximity too can contract the virus, should they be travelling in a long-distance bus.”

Wijeratne noted that, given that people have stopped using public transport, the fleet which is in operation has been cut down to 10,000 out of the entire private bus capacity of 20,000. They are also working to facilitate the commute for schoolchildren who are sitting the GCE Advanced Level (A/L) examinations over the next few weeks, he said.

“Although we agreed that we would continue to operate given that this is an essential service the public needs to access, our association members, drivers, conductors, and helpers are once again facing financial difficulties, since there is not enough income to cover the lease or wages,” Wijeratne elaborated.

He pointed out that the Government failed to deliver on the agreed concessions or provide the Covid-19 insurance to private bus owners as promised, placing them in a very inconvenient position at present.

He added that even the Sri Lanka Transport Board (SLTB) fleet will not be able to cope with the present situation, as it would have to operate at a loss, given that there are insufficient passengers accessing its services.

Manning Market to be shifted temporarily to Peliyagoda

November 11, 2020 byMihi Perera No Comments
The Manning Market is to be temporarily moved to Peliyagoda as many workers in the market were exposed to COVID-19, stated the Police Spokesman DIG Ajith Rohana.