The Sri Lanka College of Psychiatrists rejected the claims made by several parties that the Mahara Prison unrest was influenced by psychiatric drugs that induced aggression of the prisoners.

President of the Sri Lanka College of Psychiatrists Dr. Gihan Abeywardene told the Morning, “Psychological disorders are largely stigmatised in the present society, and these false claims could make an adverse impact on those who seek psychiatric medicine. We released a statement to clarify and prevent the circulation of such false reports.”

The statement issued by the College of Psychiatrists yesterday said the drugs used in Sri Lanka are also used all over the world and has been brought under the guidance of regulatory authorities.

“None of these drugs are responsible for violent and aggressive behaviour and in fact many of these drugs promote calmness and cause mild drowsiness,” the statement said.

Further, the statement reiterated that the drugs in question, if properly used, can be beneficial to patients. 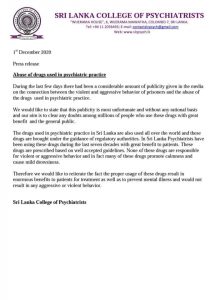 November 25, 2020 byNethmi Liyanapathirana No Comments
One sports official was found to be positive for the Covid-19 virus on Sunday (22) after a random sampling last Friday (20).

June 1, 2021 byNews Admin No Comments
The Association of Medical Specialists (AMS) has called for the strict travel restrictions currently imposed islandwide till 7 June in order to control the spread of Covid-19 to be extended beyond tha