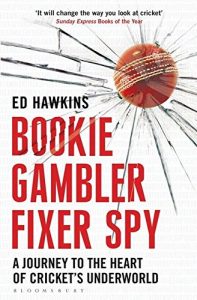 At the start of the last chapter of Bookie Gambler Fixer Spy, Ed Hawkins writes, “with every step… on the long trip to cricket’s corrupt core, my confidence in the sport eroded… It has now ceased to be.” He signs off with a final paragraph that begins, “The pessimist that I have become will never truly believe the game is pure. It cannot be.”

It is a deadening and soul-numbing conclusion, but at the end of the book’s 200-odd pages, no other can be arrived it. Only those suffering from delusions could possibly toss the book aside and hang on to the notion that cricket lives and operates in an exalted realm of “purity of spirit”.

Bookie Gambler Fixer Spy names no names, though Hawkins says as many as 45 international and domestic cricketers “have been mentioned to me as being up to no good”.

In some parts of the book, certain names are XXXX-ed out, protecting Hawkins from being libellous, but at the end of it, the disguised identities somehow do not matter. This is not a book about selective naming and shaming. It is more a clear-eyed account about an entire ecosystem of gambling, betting, and “approaching” that operates alongside and beneath professional cricket. And about why it cannot be stopped.

Hawkins, whose twitter handle is @cricketbetting, is an award-winning journalist specialising in the sports-betting business. His research for this book has been exhaustive and impressive: he spent months interacting with an entire cast of characters – “first-tier” bookies, syndicate bosses, punters, cricket officials, ICC anti-corruption officers, and men from an Indian government agency who carried out investigations into match-fixing in 2000.

The above is from July 2013 book review titled “The ugliness beneath cricket’s skin – A clear-eyed, well-researched account of the ecosystem of gambling, betting, and ‘approaching’ that operates alongside professional cricket” by Sharda Ugra

Kusal Mendis comes back to form with 86

June 15, 2022 byNews Admin No Comments
The Sri Lankan Under-19 Captain who dominated Australia’s best young guns earlier this year has been given the chance to match it with the big boys with Dunith Wellalage handed his maiden ODI cap for

First event of Tokyo 2020 gets underway