Not Just Sports: Take a look at “Olinda Keliya”! 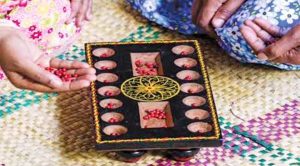 Olinda Keliya is mainly played by the women of the house

The traditional and indigenous national sports take the limelight only during the April Sinhala and Tamil New Year festival season. It should not as sports are sports, how “un-modern” or unsophisticated they could be.

It is a board game played on a wooden board, known as “Olinda Kolombuwa” or “Olinda Poruwa”. It has several holes in it. The rules of Olinda Keliya can differ from area to area, but the game is normally played by two players seated on either side of the board.

There are usually nine holes on the board. Four Olinda beads are placed in each of those holes. The Olinda seeds can be found in abundance in the local villages.

The players have to shift the beads from one hole to the other and collect the seeds found in the hole immediately after you get an empty one. Ultimately the player who could collect the largest number of Olinda beads becomes the winner of the game.

The ‘Olinda Kolumbuwa’ also showcases the creativity of Sri Lankan traditional wood carvers. These boards are usually made of ebony or Kaluwara wood. Most of these boards are found to have been designed during the Kandyan period.

There is also a large collection of these boards in the Colombo Museum indicating how popular the game must have been in the olden days.

Olinda Keliya is also special since it is mainly played by the women of the house while other traditional games are played mainly by the men.

However, the most attractive element of this game is the shiny little red and black seed – Olinda. Crab’s eye is its common English name while the seed is also known as Jequirity, Rosary Pea, or Indian licorice.

The scientific name of Olinda is Abrus Precatorius. Olinda is a slender creeper that can grow at large if the conditions are right. The vine has long and pinnate-leafleted-type leaves.