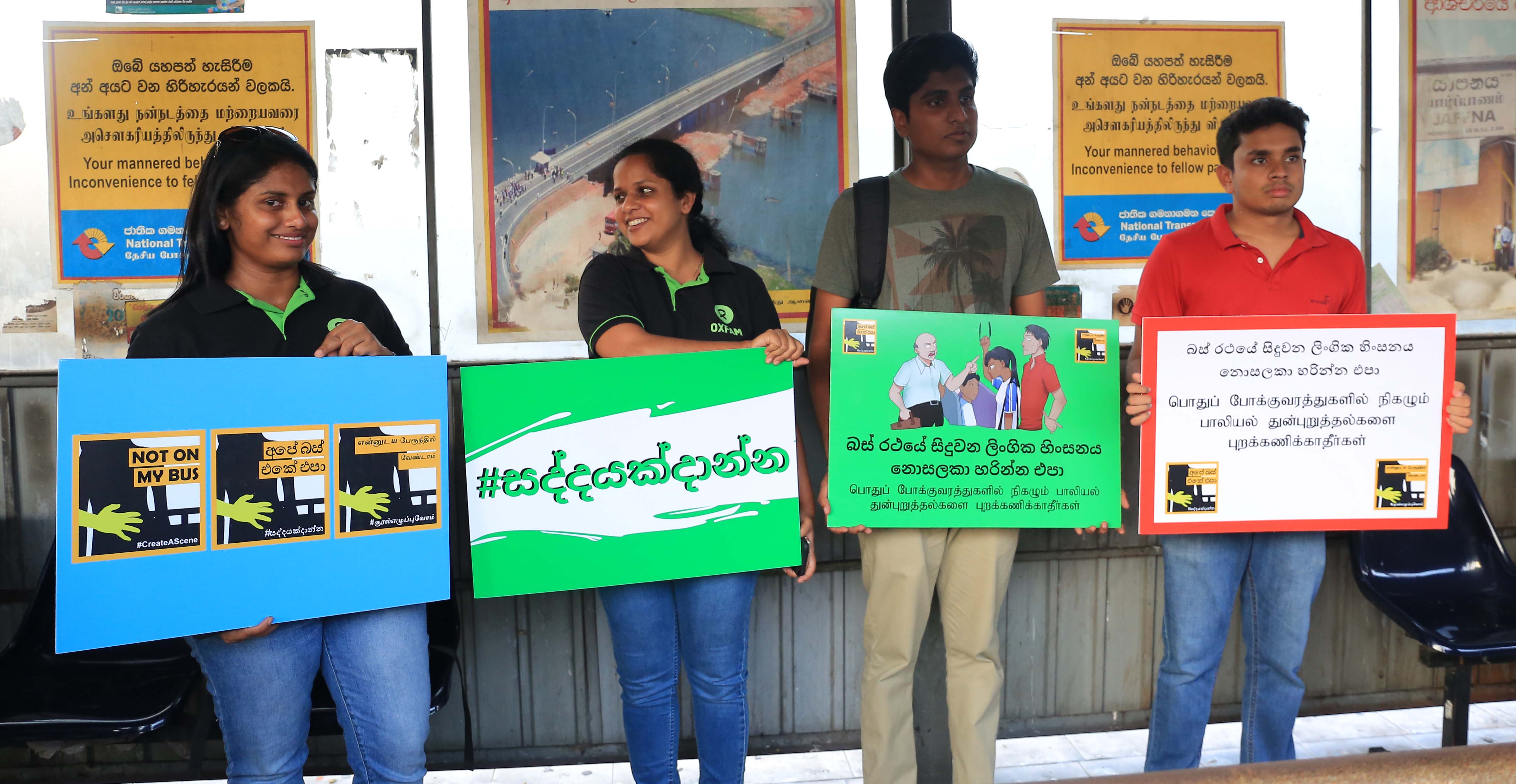 The official launch of the “Not On My Bus” campaign by Oxfam in Sri Lanka took place on 28 March 2019 amidst the presence of partners, government authorities, civil society members, and other advocates.

Not On My Bus campaign is a three-year campaign, which is a country-level adaptation of Oxfam International’s “Enough” global campaign; a trilingual call-to-action focusing on changing norms which dissuade bystanders from intervening to stop or prevent sexual harassment on buses, trains, etc. 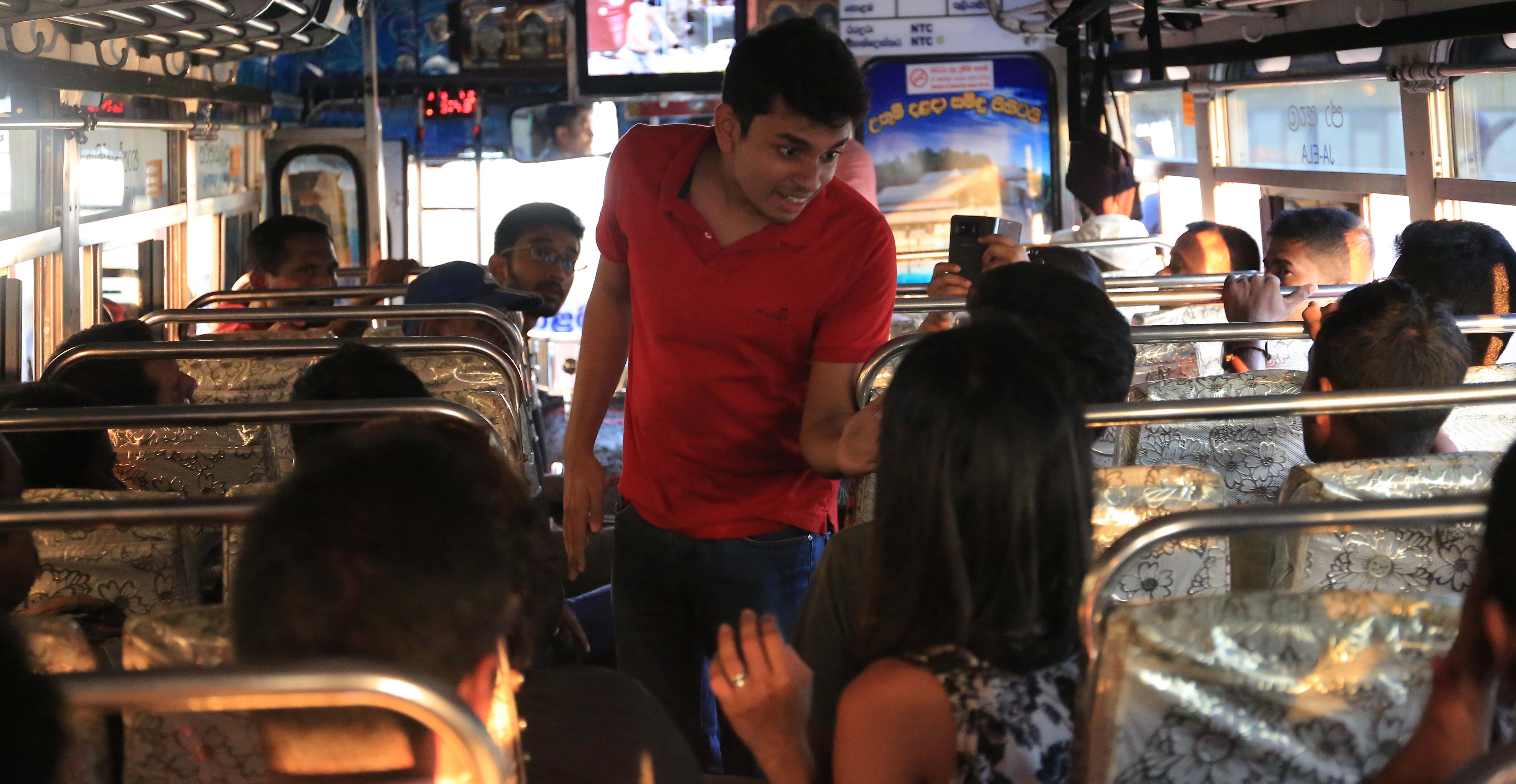 A soft launch of the campaign, incorporating the #CreateAScene, was carried out via Facebook and Twitter during March 2019, with special focused on encouraging bystanders to play a more active role in creating a safer space for women and girls who use public transportation.

Speaking to Oxfam Communications Coordinator Sheshadri Kottearachchi about the campaign and the importance of advocating for bystander intervention, she said: “Public transport is a primary area where women and girls experience harassment, and it’s important to be aware of how to assist someone who is subject to an act of violence.”

Reports show that 90% of women and girls are victims of sexual harassment in public transport at least once in their lifetime. Statistics also quote that 82% of bystanders witnessing harassment stated that they chose not to intervene. A research study carried out by Oxfam provides that bystander intervention seldom occurs in Sri Lanka during instances of harassment, stating that this level of inaction is prompted by several sociocultural attitudes.

Several workshops took place across the island since January 2018 in Colombo, Kandy, Katunayake, Batticaloa, and Killinochchi, with the participation of mixed groups ranging from the ages of 16-50, to better understand the attitudes behind such norms.

According to Oxfam, the workshops helped derive several norms such as “the onus for preventing and/or responding to sexual gender-based violence falls on women – it is their responsibility” and “it is not normal for survivors to speak out and complain”. Bystander intervention was selected as the key norm driving the campaign forward.

An awareness campaign was conducted on 26 March at the Fort Railway Station with the IdeaCouch theatre team, where the troupe acted out instances of harassment, following which they would pause to educate bystanders and then play out the same scene and demonstrate how simple it is to intervene. This appeared to be a highly effective campaign, particularly with the visual medium proving to be an almost jarring revelation after the fact, particularly when absolutely no one intervened when the harassment was being acted out.

Following the demonstration, a moderator proceeds to list out seven possible actions a bystander could take in order to combat the harassment: Look at the perpetrator; ask questions and get involved; if situation appears to be too heated, simply wait and then intervene; speak up and make some noise; note details of the perpetrator like clothes, face, gait, etc.; report the incident to the station master, traffic police, or conductor; and finally offer assistance to the victim.

By encouraging a normative shift, the Not On My Bus campaign hopes to achieve the following results:

The Not On My Bus campaign strives to help create a violence-free, safe space for women and girls in public transport through increased bystander vigilance.

March 28, 2021 byNews Admin No Comments
Over the last week, the words “environment”, “nature”, and “youth” have managed to convince everyone to switch on the news, stop our vehicles, look outside our window, and do some reading on the inter

July 6, 2021 byNews Admin No Comments
The second edition of the Merrill J. Fernando Innovation Awards has now opened applications for innovators to submit video/PowerPoint presentations of their concept or working prototype.