‘Nothing being done by the State Ministry of Women’

March 25, 2021 by Dinitha Rathnayake No Comments

Sri Lanka celebrated International Women’s Day on 8 March 2021 with several national-level programmes and events. The Morning this week spoke to Samagi Jana Balawegaya (SJB) MP Rohini Wijeratne Kavirathna, who has been a vocal proponent of women’s rights and empowerment, about the outlook for women in Sri Lanka as well as the position of the main Opposition party, SJB, and the strength of the Government.

The following are excerpts of the interview. 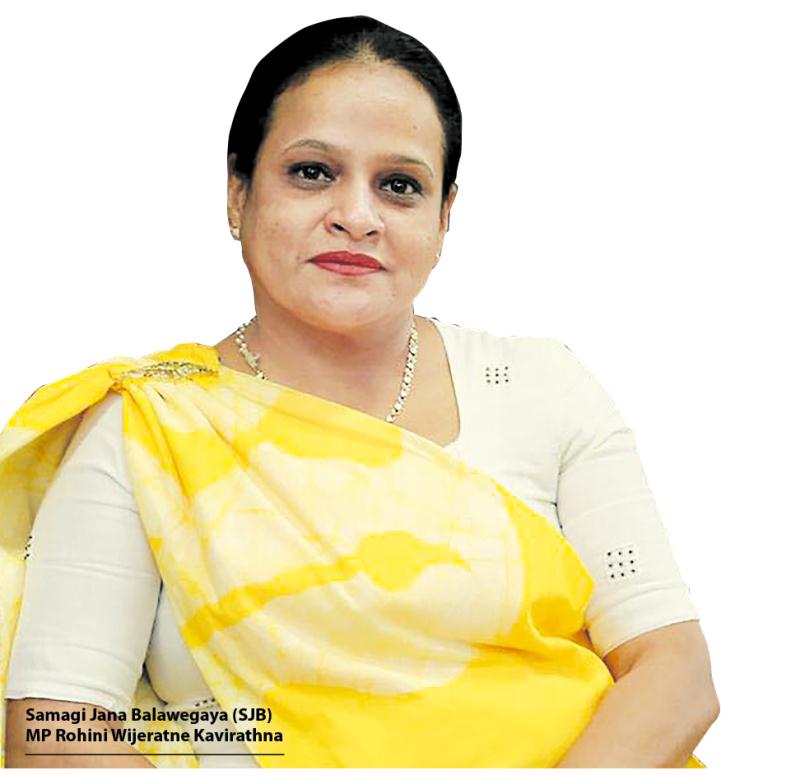 “The Opposition’s main role is to question the government of the day and hold them accountable to the public. As the Opposition, we do that every day. However, this doesn’t mean the Opposition has to oppose every single decision made by the Government”

Do you believe there are worthwhile, impactful initiatives carried out for women by the State Ministry of Women and Child Development?

I don’t feel there is anything being done by the State Ministry of Women and Child Development.

In your opinion, what is the most important reform for the empowerment of women?

We heard that the new “Convention and Recommendation on Violence and Harassment in the World of Work” was approved by the Cabinet of Ministers and is soon to be implemented, according to Minister of Labour Nimal Siripala de Silva. The new Convention No. 190 represents an opportunity for unions to move their fight against gender-based violence forward and sets out 12 clauses that relate to the protection and wellbeing of workers.

Violence and harassment in the world of work can happen everywhere – online, in the physical workplace, during the commute, where workers rest, eat, or attend to their health and sanitation needs, as well as at social gatherings. Studies and analyses have long shown that harassment in the workplace has detrimental effects on employees’ ability to focus, as well as on their emotional and mental wellbeing.

Other countries offer both paternity and maternity leave.

The adult literacy rate is the percentage of people aged 15 and above who can both read and write and also can understand a short, simple statement about their everyday life. Sri Lanka’s literacy rate is 98%. The total number of students admitted to universities last year was 30,000 and steps have been taken to admit 41,500 students who have passed the Advanced Level (A/L) examination in 2019 under the new syllabus and the old syllabus. Since I was in this education sector, I know that most of the university students are female, apart from those in the engineering faculty. But the service sector of Sri Lanka represents only 35% of female representation. This is where inequality comes in. From the 52% of female representation in the country, we only represent 35% in the service sector. Where is the loophole? Female labour exploitation is everywhere. Sometimes I regret being a woman.

There are claims that the Opposition is not strong enough and that it feels like there is no Opposition. How do you address this?

I don’t know why anybody would say that. The Opposition’s main role is to question the government of the day and hold them accountable to the public. As the Opposition, we do that every day. However, this doesn’t mean the Opposition has to oppose every single decision made by the Government.

Actually, it is the Government that has created this negative perception about the Opposition. They carried out the same campaign against former Prime Minister Ranil Wickremesinghe. I’m not a United National Party (UNP) member anymore, but I should say that this Government adopted the ideas and concepts of the UNP and marketed them as their own. Ranil Wickremesinghe is the one who initiated highways during the 2001-2004 period. He did a lot for this country. But when Mangala Samaraweera moved to another coalition, he was the one who formulated the “Ranilta Ba” (Ranil can’t) campaign. This Government came into power by spreading false rumors about extremism and hatred among ethnic groups in society. We

challenge the Government to have an election right now and see the results.

No, we voiced out against the bond scam. We don’t care if it’s a bond or sugar. If somebody is responsible for any corruption, they should be punished; otherwise, the situation would deteriorate even further.

Does the public have the same confidence about the Government they had before the general election?

People are fed up and have lost faith in the Government. Can you find anybody who voted for them? They gave a lot of promises to the public, but nothing was fulfilled. Every sector is disgusted.

What are your thoughts about the internal conflicts within the current Government?

They need to solve those among themselves first. Who will be the next presidential candidate, Gotabaya Rajapaksa or Basil Rajapaksa? We see a split in the Government. One faction supports President Rajapaksa and the other one Basil. However, the President recently said he is ready to take part in the next presidential election, but earlier he said he will not look for a second term.

Would the provincial council elections take place soon? How is the party’s preparation?

Why can’t the Opposition raise their voice against environmental issues before it gets out of hand?

We only get to know about these issues after they are reported. The best example is the building construction at Pitawala Pathana at Riverston. Environmental organisations claim that endemic species of fauna and flora have been destroyed due to those engaged in the construction activities cutting down trees in the area. Who gave approvals? Pitawala Panatha is known for its rare varieties of plants and animals like Kandulessa, nil monarassa, several varieties of pathan yam and the Dumbara galpara frog. Some government officers misusing their power should know this and I request not to bring party politics into environmental issues.

Do you believe the Environment Ministry has done its duty so far?

I can’t see that they have.

Is the SJB divided?

No. Who says that? We all work together.

What about Patali Champika Ranawaka?

He is a party who wants to work with us. These are all assumptions in the media.

What about the Easter report recommendations?

We need answers about Zahran (Hashim) and those who invested in him. Why isn’t there any information about Sarah Jasmine who fled to India by boat from the Mannar area. Is she alive, under protection, or killed?

January 10, 2022 byRuwani Fonseka No Comments
The efforts of Sri Lanka and Kenya to increase economic activities between the two countries had received further momentum during the visit of Minister of Youth and Sports, Minister of Development

July 21, 2022 byNews Admin No Comments
When one thinks of a “developed” country, the first thought that would come to mind would probably be a stable and mature economy, typically linked to industrialisation. Needless to say, the concept o