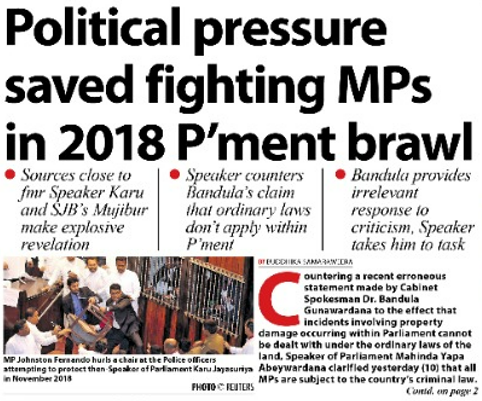 Countering a recent erroneous statement made by Cabinet Spokesman Dr. Bandula Gunawardana to the effect that incidents involving property damage occurring within Parliament cannot be dealt with under the ordinary laws of the land, Speaker of Parliament Mahinda Yapa Abeywardana clarified yesterday (10) that all MPs are subject to the country’s criminal law.

This comes in the wake of sources close to former Speaker of the Parliament Karu Jayasuriya and the current main Parliamentary Opposition, the Samagi Jana Balawegaya (SJB) blaming pressure from top political authorities for the scuttling of legal action against the MPs who vandalised Parliamentary property in the infamous incidents of November 2018 during the unconstitutional coup of the 52-day Government.

Speaking in Parliament yesterday (10), Opposition and SJB Leader Sajith Premadasa had commented on Dr. Gunawardana’s statement, and requested the Speaker to make an explanation as to whether the Offences Against Public Property Act and the Penal Code are not applicable to the Parliament.

“On Tuesday (9), the country was misled regarding the powers and privileges of MPs. We all know that MPs are entitled to certain powers and privileges, such as the freedom of speech and debate. However, it was said that the Offences Against Public Property Act is not applicable to Parliament. Therefore, I would like to ask if the Offences Against Public Property Act and the Penal Code are not valid in Parliament. Can murder, assault, and robbery be committed in this Chamber?” he queried.

Claiming that a group of people are of the view that the 225 MPs are above the general public, and that there is a separate law for MPs, Premadasa said that when the Cabinet Spokesman said that the Offences Against Public Property Act and the Penal Code are not applicable to Parliament, it sent a wrong message to the country that there is one law applicable to Parliament, and another to society.

Speaking after Premadasa, SJB Colombo District MP Mujibur Rahman claimed that Gunawardana had made a statement that may incite the people further. Noting that former Speaker Jayasuriya had appointed a committee to look into the incidents that took place in Parliament during the 52-day Government in 2018 (a reference to the removal of then-Prime Minister Ranil Wickremesinghe, and the appointment of Mahinda Rajapaksa as Premier by then-President Maithripala Sirisena, and the subsequent incidents), he said that the said committee had found five MPs guilty.

“The Criminal Investigation Department (CID) conducted an investigation into the incidents and the MPs were even about to be sued. The Secretary General of Parliament said at that time that the loss was Rs. 130,000. When they were about to file the cases, the suspect MPs were identified by recording statements from the employees of Parliament. However, the cases were not filed due to political pressure. Therefore, I would like to ask the Government to appoint a Cabinet Spokesman who knows and reads the law. Don’t belittle Parliament by appointing jokers,” he charged.

In response to Rahman’s statement, Dr. Gunawardana said: “What I stated was that there is an Act through which the privileges for MPs have been classified. According to that Act, an MP cannot be arrested when he arrives in and leaves Parliament. Likewise, a number of special privileges have been given to the MPs by an Act. An MP was brutally killed, and the houses of 72 MPs were set on fire on 9 May. There was an instance where MP Vasudeva Nanayakkara was brutally attacked in Parliament. I am worried that you all are talking like this without knowing anything. Please protect the honour of this Chamber.”

While Gunawardana was speaking, Speaker Abeywardana was seen advising him saying: “Please answer the question.”

When Kiriella said that there was no law in Parliament that stated that the criminal law is not applicable to MPs, Speaker Abeywardana agreed, saying: “Everyone is subject.”

Furthermore, when contacted, sources related to Jayasuriya, who was Speaker of Parliament in 2018, said that although the Police, including the Criminal Investigation Department, was to take action against the MPs who had damaged Parliament property at the time, action could not be taken against them due to the top political authorities at the time.

Speaking at the weekly Cabinet media briefing on Tuesday (9), Dr. Gunawardana had said that property damage and other incidents related to Parliament could not be dealt with under the ordinary law of the country. He said that such a matter could only be addressed within Parliament, and that it could not be questioned even by the courts. Claiming that any incident related to Parliament should be reported to the relevant Parliamentary authorities by the Speaker, Minister Gunawardana said that an inquiry would thereafter be conducted by Parliament. He also said that if an investigation had not been conducted with regard to such an incident, the Speaker should be questioned about such.

He made these comments in response to a question raised by the media on the recent arrests of the activists who were engaged in the public protests against the Government, and the non-implementation of legal action against the MPs who damaged Parliament properties during the period of the 52-day Government in 2018.

One missing after two boats collide in Diyawanna Lake