Now is the time for China FTA: EDB Chairman 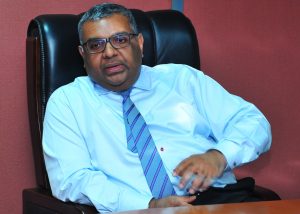 Given the global economic disruption caused by the Covid-19 pandemic, now is the most suitable time for Sri Lanka to resume negotiations on its proposed Free Trade Agreement (FTA) with China, Export Development Board (EDB) Chairman Prabhash Subasinghe believes.

“We should fast track the Chinese FTA. This is the time to do that,” he told The Sunday Morning Business on Friday (27).

China is the world’s second largest economy and an FTA with it has been coveted by Sri Lanka for many years. Negotiations on this FTA finally commenced in 2016, but had come to a virtual standstill by 2018.

While acknowledging that it could not be looked at immediately due to the prevailing situation, Subasinghe added that it should be the top priority of the Government as far as the export sector is concerned once Covid-19 is eradicated from the island.

While Sri Lanka has virtually no bargaining power on the economic front during negotiations with China, he was of the opinion that the island should leverage its strategic geopolitical positioning to obtain a fair and mutually beneficial trade agreement.

He added that as Sri Lanka has a negative trade balance with China and is insignificant in terms of economic strength; the world’s second largest economy would not mind providing us free access to their market.

“What can we do? We cannot even go and fill 0.001% of their national demand. I think it is a matter of negotiation,” Subasinghe added.

Furthermore, he noted that Sri Lanka needs to have a number of FTAs with Asian markets as years down the line, these markets are going to perform better than Europe and the US.

In late January, Subasinghe expressed his intention to sign the long-delayed FTA with China within the next 12-18 months, but the Covid-19 epidemic in China delayed those plans.

The massive difference in bargaining power between the two nations also meant that China insisted on a zero-tariff regime, which would have overwhelmingly benefitted them due to the bilateral trade relationship being dominated by China’s exports to Sri Lanka.

China is Sri Lanka’s second largest source of imports, after India. Sri Lanka’s pushback on these proposals is also believed to have contributed to the breakdown of talks in 2017.

China, which is the epicentre of the Covid-19 outbreak, is on a rapid recovery phase at the moment with no or one-digit confirmed case(s) being reported over the past two weeks.

After more than two months of lockdown, China was seen returning to normal during the past week. International news sources reported that factories were re-starting and companies were re-opening and people are going back to their lifestyles.

However, MarketWatch reported that China’s combined January-February economic data released in mid-March showed a worse-than-expected hit to the economy due to the virus, with value-added industrial production down 13.5%, fixed asset investment down 24.5%, and retail sales down 20.5%. Those months also saw at least five million workers losing their jobs, bringing the official unemployment rate to 6.2%.

There is broad consensus that the first quarter of the year will bring a contraction in China’s GDP with Covid-19 factored in. And for the full year of 2020, economists across the board have revised their growth projections downward. Goldman Sachs dropped its initial 5.5% forecast to 3%, Standard and Poor’s (S&P) lowered it from 4.8% to 2.9%, and Nomura from 4.8% to 1.3%. High-level Chinese government leaks suggest that even the official projections may be revised downward from the current 6% for 2020 to 5%.

Will the sugar tax leave a bad taste in your mouth?

July 15, 2019 bythemorninglk No Comments
Government has stated that it will re-impose the tax on sweetened drinks that was first imposed in 2018, citing health concerns as the motivation behind it.

November 8, 2018 bythemorninglk No Comments
The Stock Exchange must be granted independence and wrested from the control of the brokerages. Only then shall we see new tricks from this old dog. We need another Cesar.