Sri Lanka’s main fast bowler Suranga Lakmal is doubtful for Friday’s 2nd Test with a stiff back, It is reported.

“We are monitoring his situation. No decision yet whether he will be available,” said Sri Lanka skipper Dinesh Chandimal.

If Lakmal ruled out Chamika Karunaratne, who only arrived in Australia on Wednesday, is likely to make his international cricket debut. 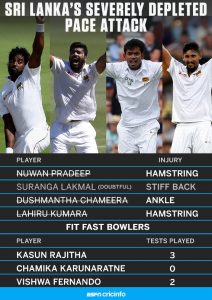 Sri Lanka’s other key pacies, Nuwan Pradeep, Lahiru Kumara (both hamstring injuries) and Dushmantha Chameera (ankle) too were ruled out earlier due to injuries for the second Test in Canberra.

Lakmal was a shining light for Sri Lanka in Brisbane as he claimed five for 75.That followed a five-wicket haul in his previous Test in Christchurch as he shoulders the burden of leading the pace attack. Sri Lanka desperately need him to be fit if they are to compete in Canberra, but will also need to be mindful that there is the tour of South Africa to follow.

“We are monitoring his situation,” captain Dinesh Chandimal said. “No decision as yet whether he will be available.”

Chandimal confirmed that Sri Lanka would retain the same balance to their side with seven batsmen including wicketkeeper Niroshan Dickwella, who was one of the few players to stand up in Brisbane, and a four-man attack of which three would be pace bowlers.

If Lakmal was ruled out that would open up a debut for the uncapped Karunaratne with Kasun Rajitha and Vishwa Fernando already earmarked to come into the side.

103rd Tennis Nationals – The past champions

August 23, 2018 byRevatha No Comments
Here is the Champions Roll of the historic SL Tennis Nationals, now on at the SLTA, Colombo

HERE IS THE FULL REPORT!: Danushka Gunathilaka recommended for counselling