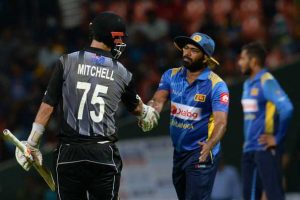 Chasing 162 to win with six wickets remaining, New Zealand needed seven runs in the final over, bowled by right-arm leg-spinner Wanindu Hasaranga. He took two wickets, that of Tom Mitchell and Daryl Mitchell, in his first two deliveries prompting the Kiwis score seven runs in the last four balls.

At that point they should have lost the wicket of Mitchell Santner too, in the third ball of that over, when Shehan Jayasuriya took a running catch at the wide long-on boundary but after taking the catch, he was tripped up in his stride by oncoming Kusal Menids, who too ran in from deep mid-wicket towards the catch. As a result of the collision, Jayasuriya crashed into the boundary line adding six runs to the New Zealand total. Thereafter they needed just one run off three deliveries. Santner whacked a four in the fourth ball of the last over bringing the series-clinching victory to the tourists.

Earlier, Niroshan Dickwella, with 39 runs off 30 balls, guided Sri Lanka to a competitive total of 161/9 when they batted first after winning the toss. Kiwi opening bowler Seth Rance took three wickets for 33 runs.

New Zealand in their run chase were in a spot of bother when spinner Akila Dananjaya struck with three quick wickets to reduce them to 3/38 in the fourth over. Then Colin Grandhomme and Tom Bruce shared a record 109 runs for the fourth wicket to take them close to victory. Grandhomme scored 59 inclusive of three sixes wile Bruce made 53 in 46 balls.

New Zealand skipper Tim Southee, who took 2/18 in his four overs, was adjudged the Man of the Match.

The final T20I between the two countries will be held on Friday, 6 September.

Nonagenarian and legend that is Stanley Jayasinghe

March 27, 2021 byRevatha No Comments
Sharing anecdotes of the batting maestro of the 1950s and 60s

Dhananjaya de Silva and Dickwella to get highest price