Ocean Watch: Impacts of sound pollution on the marine environment 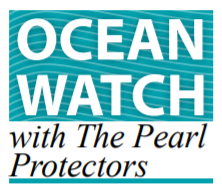 Imagine a world with no communication! We human beings communicate and share our thoughts by talking to each other, just as all living beings around the world communicate between their species in order to make their lives easier. When it comes to marine life, species with larger body sizes, and even smaller ones, communicate and rely on sound to survive through hearing.

Sound is the most efficient and effective way of communicating underwater over distances and is the primary way for many marine species to gather and understand information about their surroundings. Many aquatic animals use sound to find prey, to locate mates and offspring, to avoid predators, to guide their navigation and to locate habitat, and to listen and communicate with each other.

Biotic sounds are sounds derived from living creatures where the sources are produced by fish, invertebrates, marine mammals, and other marine organisms, and are primarily intended for communication, orientation, detection of mates and prey, and for echolocation. Marine organisms can produce biotic sound in a variety of methods.

Abiotic sound sources provide important information about the location for marine organisms, which can be divided into two categories: natural sound and anthropogenic sound. Sea waves on the coast, currents moving over the reef, raindrops on the surface of the ocean, tides, ocean turbulence, and sound produced by seaquakes and underwater volcano eruptions are typical natural sounds.

With the industrial revolution, human lives have shifted a great deal from traditional strategies to technical strategies. As a result, human activities such as shipping, recreation, and energy exploration have increased along the coast, offshore, and in deep ocean environments. As a result, a massive ocean noise was created. That’s where the “anthropogenic sound” was created, both intentionally and unintentionally, in the ocean. 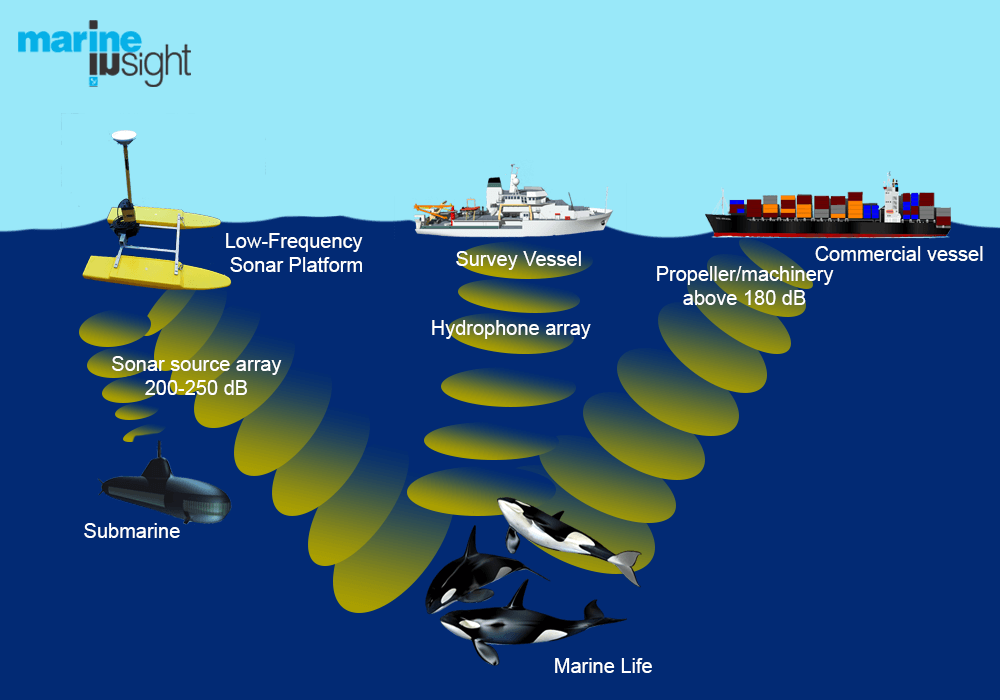 According to statistics, there are approximately 1.2 million vessels in general use. In addition, the number of recreational boats in coastal areas has increased rapidly. Another factor for marine low-frequency stationary noise is the proliferation of ocean-going freighters that transport large cargoes as a critical link in the maintenance of global trade. The number of large cargo ships has steadily increased by 8-14% in the first decade of the 21st Century.

These anthropogenic sounds may interfere with or obscure the ability of marine animals to hear natural sounds in the ocean. The high levels of noise can have an impact on marine animals and the ecosystem and may reduce the ability of animals to communicate with potential mates, other group members, their offspring, or feeding partners. Noise can also reduce the ability of an animal to hear environmental clues that are vital to survival, including those that are key to avoiding predators, finding food, and navigating to preferred habitats.

Underwater sound pollution will not end up influencing the acoustic communication of aquatic animals by auditory masking, but it will cause physiological damages to marine animal hearing systems. Physically, once the cochlear cells (cochlear hair cells are the sensory cells of the auditory system) of a marine animal are damaged by a huge sound, they will not be repaired or replaced for a long time. The same goes for physiological damages, which result in stimulation of the nervous system, metabolism changes, and malfunctioning of the immunity.

Moreover, this underwater sound pollution can lead to a reduction in the recruitment of some marine species, as it has resulted in an increase in body malformations. Furthermore, when there are unfavourable noises, marine species begin to leave the environment, resulting in a reduction in population density. This can have a direct impact on the ecosystem.

Human beings will never stop urbanisation, and as such, this sound pollution will gradually increase as people move more towards the industrial revolution. Unless the authorities begin to address this, we may not see the invisible deadliest threat to marine animals and the ocean that is right in front of us.

(This article was compiled by Thakshila De Silva, who is a volunteer of The Pearl Protectors [@pearlprotectors])

Cheat meals, scaling Everest, and the importance of being earnest

August 28, 2018 byJennifer Anandanayagam No Comments
With Colombo's most stylish milling about under one roof, ODEL's premier Fitness Week was launched at dusk on 23 August 2018.