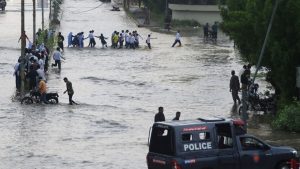 Karachi was denied the chance to host its first men’s ODI since 2009 as the match was called off without a ball bowled.

It is the first time an ODI has ever been washed out at the venue.

Heavy rain hit the National Stadium before the start of play and continued past the start time. There was a brief break from the downpour but it was not enough to allow the outfield to dry before the drizzle returned, forcing the complete abandonment of the match.

The second ODI was earlier scheduled for Sunday, 29 September is now set to take place on Monday, 30 September at the same venue.

The postponement by a day was owing to un-seasonal rains that left Karachi’s National Stadium waterlogged.

With more rain expected on the day of the second game – Sunday – the Pakistan Cricket Board, in consultation with the Sri Lanka Cricket Board, has rescheduled the game to Monday.

“This week’s heavy rains, including on Friday afternoon, has left the outfield soggy, with the ground-staff requiring at least two complete days to make the ground fit for cricket,” a PCB media statement said. “The PCB has also announced tickets sold for Friday, 27 September, will be valid for either 30 September or 2 October ODI, while tickets sold for Sunday, 29 September, match may also be used for either 30 September or 2 October ODI. As per the PCB ticketing policy for the series, the PCB will also allow refund of all tickets for Friday’s match.”

PCB director of international cricket Zakir Khan said, “This week’s un-seasonal heavy rains have forced us to review the series schedule. I am thankful to Sri Lanka Cricket as well as our host broadcasters for agreeing to amend the match schedule to ensure there are no further abandonment due to rain in what is an important bilateral FTP series for Pakistan.”

Unexpected rain in Karachi had put this game in doubt as early as 48 hours before the scheduled start, with the city lashed by heavy afternoon rains each of the past three days. With a training session cancelled on Wednesday and only a short one possible on Thursday, the square had been under covers all this while. This afternoon, when perhaps the heaviest spell of rain all week descended upon the National Stadium, cancellation was inevitable.

It is by no means a familiar phenomenon for the city, this match being the first ODI ever to be abandoned because of the weather in Karachi.

May 7, 2021 byRevatha No Comments
Football news from the European circuit

August 6, 2021 byRevatha No Comments
Tigers win a series against Australia in any format